With a driving rhythmic flow, Juliana’s lyrics addresses colonialism, cultural identity, reclamation of power and gender inequality in a distinctive style that flips from hauntingly melodic to powerfully raw.  Melodic Distraction were lucky enough to catch Juliana ahead of her appearance at Liverpool Arab Arts Festival later next month. Spread over the first couple weeks of July, LAAF showcases music, visual art, theatre, literature, poetry, film and dance in the UK’s best celebration of Arab culture. Be sure to check out the rest of the programme on the link at the bottom of the interview too.

You released your debut album, SUNGOD, not too long ago. How did it feel to complete the project, to cease working on it and release it out into the world?

It felt great! I’d never experienced that feeling before: having a complete musical “product” as it were. After spending years writing it and months producing it, suddenly you release it into the world, and it’s no longer yours but the people’s. I love that entire experience to be honest. I’m looking forward to doing it all over again.

One of the most rewarding outcomes was receiving feedback from women and girls who said the album shifted the way they view themselves, their power, their beauty, the world around them… When I wrote the album, I wrote the music and the voice I had always searched for but never found. So to see my voice reaching other women and girls so deeply is an honour.

You’re also a writer and a voice artist as well. Can you tell us a little bit about the work that you do? Do you think that the art forms feed into one another?

My writing and my music are definitely linked. When I have something to say that won’t fit in a song, I’ll write an entire article about it. If there’s a topic I want to write about poetically, I’ll turn it into a song. I never stop writing, in any form. All of my writing feeds into itself – it’s a nonstop relentless web of essays, songs, poems, journal entries, tweets, conversations… (and I wonder why I get insomnia?)

I have sometimes been discouraged from publishing my writing, as if it would somehow hinder my musical career. And I know that it is because I am a woman. I look at artists like Akala and Lowkey, whose work I admire, and see them publishing books, giving talks at universities… and making great music. There’s no reason why women can’t do that too. It’s infuriating that this even needs to be said. 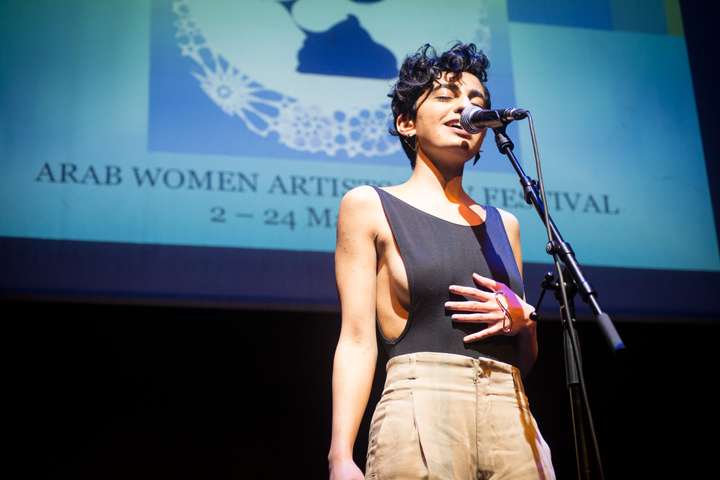 Your music straddles a number of genres, both delicate and harsh, rhytmic and melodic, modern and traditional. It’s pretty much a perfect fit for LAAF’s theme this year ‘Shadow and Light’. Did you listen to a wide range of music growing up? What were some of your favourite records or artists growing up?

Oh yes. Good music is good music, regardless of genre. I think for a lot of musicians, there is no such thing as ‘genre’ really. That’s up to the record labels and PR companies and such. The artists I listen to range from Eivor (haunting Faroese indie ballads) to A Tribe Called Red (First Nations Canadian electronic duo) to Seinabo Sey (empowering Gambian-Swedish pop). Obviously a huge variety of Arabic music too. From proper legends (Um Kulthum, Sabah Fakhri, Wadih El Safi) to more recent greats (Julia Boutros, Kadim El Saher, early Assala) to super alternative badassery like 47Soul, Maryam Saleh, Alsarah and the Nubatones…

I listen to alot of ancient sounds: duduk, throat singing, skin drums, indigenous musical traditions from around the world. I’m interested in music that feels real, that comes from a place deep inside the musician and the culture, music that could conjure a spirit or shift in an energy field.

I love this questions! And the answer is, without hesitation, yes. Music is magic. It is prayer and power – especially, I find with vocalisation. When we sing, we can invoke, cleanse, heal, summon, depending on the intention. Music is our most direct connection to our ancestors and to the divine.

There is something powerful about performing within the traditions of one’s heritage and history, especially within cultures that have been historically whitewashed and colonised. Equally, those of  us who have been stripped of our ancestral ways, music included, may not have been educated in our culture’s musical traditions – say second generation immigrants or such. That doesn’t mean their music isn’t culturally valid or doesn’t speak to the ancestors. Music is powerful as long as it comes from a place of truth.

You sing in a mix of Arabic and English, but perform to audiences who might not understand all of your lyrical content. Lebanon and London are separated by great political, economic, physical and linguistic divides. Is comprehension non-essential for an audience to understanding your message, and understanding your own personal protest?

I have often thought and providing translations to my lyrics. It seems that Arab listeners have no issue with the English songs. So it’s often the Arabic songs that I am pressed to translate. Aside from the fact that it would be painful to see my Arabic lyrics translated into English (no shade, but English does not have the range for Arabic poetry!) I always come to the same conclusions: not everything is for Anglophones, and that’s okay. Some of my music is for Arabic speakers. It is not excluding anyone. It is simply a statement of owning my space, in my mother tongue, and making no apology for it. When we are constantly expected to adapt to the needs of Anglocentricity, a small act such as this can be very empowering. That being said, I’m still thinking about it.

Decolonisation and the struggle to unlearn inherited shame comes through as a theme through lots of your work. How do you use the process of making music to decolonise your mind and your spaces?

By challenging everything: from the environments I choose to work in to the people I collaborate with, and of course, the writing process itself. If a music studio feels a bit patriarchal to me, I move to a different studio. If my sound engineer is moving mad with the racial microagressions, I move onto a different sound engineer. If the voice guiding my music writing process is not my own, or if I feel I am writing reactively rather than actively, I take a breath (both literally and metaphorically) and call on my ancestors to guide me. There is no room for boundaries, rules, or industry standards in my process – all of those are colonial structures and would limit me and my work.

Most importantly, I challenge myself, all the time. ‘Am I working with this person because I’m too insure to do it on my own? Or because I want to work them?’ or ‘is this really what I want to say, or am I being apologetic, shrinking or self-fetishising?’ It took a very long time to unlearn all the whitewashing and patriarchal conditioning I had undergone – years, really. And I’m still at it.

LAAF is spread over 10 days and features lots of other artists coming into the city, from a variety of artistic backgrounds. Have you ever worked alongside any of the other artists? Whose work are you excited to see?

The entire programme is beautiful. To see all these artists repping their stories, their ancestors, their gifts… this is the dream. I don’t think I[‘ve ever worked with any of them, thought I have met a couple when I was still living in Beirut.

Honestly, the tribute to Rim Banna sounds breathtaking. That’s something I would love to witness. I’m also hoping to catch a couple of the exhibitions before I zip back to London after my LAAF show. There are artists I’ve never even heard of, and I’m sure many other have never heard of me either, so this platform is just amazing for the community. I wish I could meet every single one of them and see all of their work!

Juliana will appear with the UK premier of SUNGOD, performing at the Royal Court Studio on Friday 5th July. Her show will launch the entire Liverpool Arab Arts Festival programme, who celebrate another incredible year of highlighting Arabic music, visual arts, dance, theatre and culture.

Catch SUNGOD out on all platforms now