The more eagle-eyed of you out there may have noticed that the Melodic Distraction window shutter has recently been given a colourful make-over. After a handful of wet and rainy false starts, Leeds-based visual artist and DJ, Cress Cooper, AKA Chris Cooper, adorned our metallic façade with a damn fine mural, inspired by the paradigm of communication and the musical connections he associates with the Melodic Distraction studio.

As a co-host of the monthly ‘Don’t Look Now’ show, a two hour journey into the bass heavy music that typifies his Sheffield-based party of the same name, Chris has become part of the Melodic Distraction family, and we’re proud to have his work represent us!

We caught up with Chris, to find out all about what fuels his artistry, the relationship between his art and music, and what he’s looking forward to in 2018…

For those who aren’t already familiar with your art or radio show, can you give us the lowdown on who you are and what sort of vibe you bring to your artwork?

I’m an image maker hailing from Sheffield, and currently based in Leeds, where I’m in my final year studying illustration at Leeds Arts University. Although I study illustration, I use the term “image maker” due to my involvement in graphic design as well as illustration. Sometimes this is separate from my personal illustration work, however I try to bring elements from each area of my practice into the other.

Currently I’m trying to figure out who I am visually, given that there are a lot of different aspects ranging from, digital, to collage, to painting that make up practice. However, I have a strong love of the print process, which is an underlying influence on much of what I do given that screen printing naturally favours bold shapes as well as textual work. This style is present in all the different aspects of my practice. 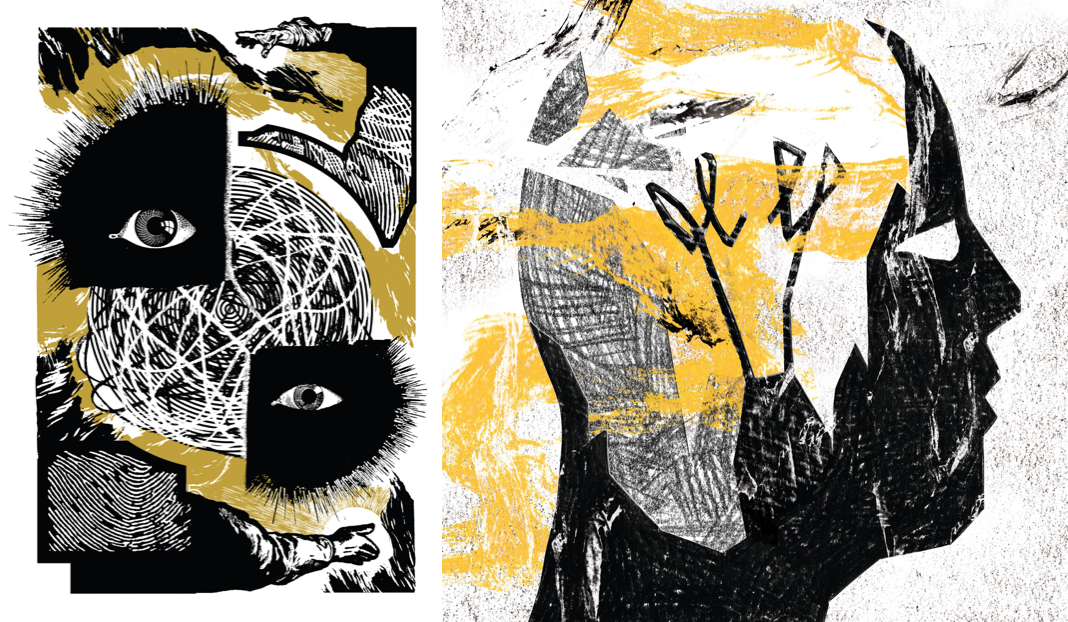 I’ve known Tom Lye, Melodic Distraction’s station manager, for almost as long as I can remember; attending both the same primary and secondary schools and being friends pretty much the entire time. As we got older we gravitated towards the same scenes, particularly in terms of music which culminated in putting on a night, Don’t Look Now, in Sheffield with our other friend Sam Ross.

Naturally when we went our separate ways for university he was keen to get us involved with Melodic Distraction, on which me and Sam currently have a monthly show. Through this, as well my recent solo exhibition at Constellations, I’ve come to know the rest of the members of the team and was delighted to be asked to paint the shutter for the Melodic Distraction studio.

With one foot now firmly planted in Liverpool, it was interesting to see what other projects Chris has on the go.

I’ve just had my first solo show, which was on display at Constellations throughout February. Previously I’ve displayed work at  group shows in Sheffield for both Mardy Arts and Brick Gallery, both of whom have been really supportive of my work over the past few years and are worth checking out.

The Melodic shutter was the first piece of large scale mural work I’ve done since back when I was involved in Sheffield graff scene. I was really happy with how it turned out, I’ve really been missing the process of painting on such a large scale. I’m keen to get more projects like this lined-up, particularly once the weather gets better and I won’t be freezing my hands off!

Off the back of this I’m hoping to get more work on display in Liverpool, Sheffield and Leeds towards the end of the year. In particular, I’m hoping to put together a collaborative zine and print show with some other Leeds-based artists, although this is still in its early stages and has a long way to go yet!

It was interesting to learn more about Chris’ process, how he decides on a paint location or what gallery he decides to display he work in. 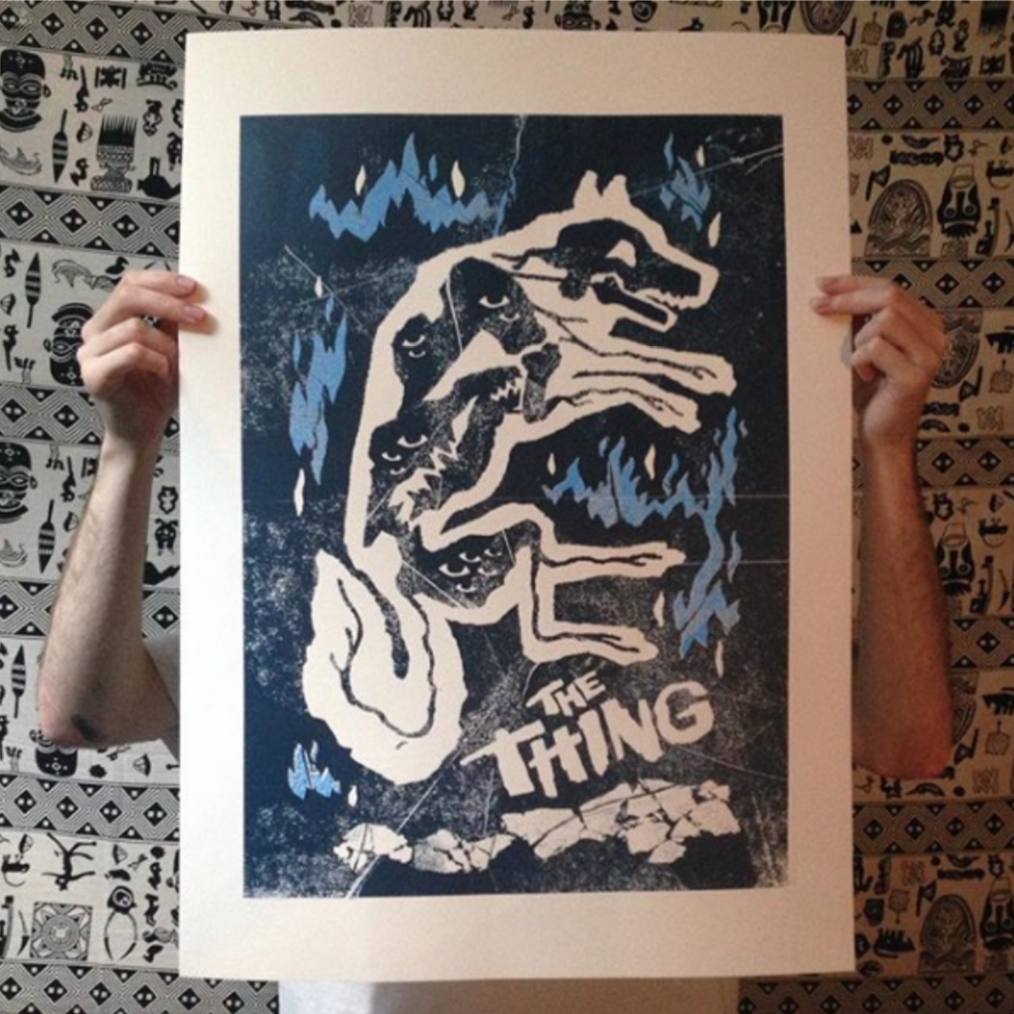 This all has to do with the content and context of a project. I always try and have some element of communication at the centre of my work rather than producing something purely for aesthetic’s sake. This can be something more specific, for example with an editorial piece, where a specific concept will need to be communicated, or something more open-ended. With a lot of music-related pieces it’s more about conveying a particular tone or feeling, so visually you’re less locked into specific points of reference.

In general, I would say that much of my work is heavily concerned with composition and texture. I’m interested in the balance between light and dark, with much of my work being comprised of reductive colour palettes and areas of highly contrasting tone. Given that I work both digitally and with traditional mediums such as painting and printing, I’m really interested in the relationship between digital and analogue processes.

An artist who is still carving out his own visual identity, it’s interesting to hear which illustrators Chris recommends we check out.

Louis Byrne’s work is definitely worth checking out. He’s also a third year illustration student at Leeds and is producing some really great stuff at the moment. He’s recently produced some great work for Hookworms’ new LP on Domino Recordings.

With his monthly show on Melodic Distraction Radio bringing in a much-welcomed Sheffield connection, we had to find out what music Chris had been digging lately.

I’m quite obsessive when it comes to searching for new music so this is a question that could easily become quite sprawling. If I had to pick favourites from the past few months, on the more club-oriented side of things, I’d have to say anything being released on Pinkman and Kneklehaus Records from Holland.

For general listening I’ve had Oliver Ho’s new Zov Zov album, as well as the new Chris Carter LP, on heavy rotation. Generally I’m drawn to the weirder sounding electronic stuff that is gritty but still has a bit of funk and melody to it rather than being needlessly abrasive.

With so much on the go, both visually and musically, Chris fills us in on how the rest of his 2018 is looking.

I’ve got a few things brewing in the background that will hopefully come to fruition later in the year but can’t really say too much at the moment. In the immediate future I will be releasing a new line of t-shirts which will be available, fingers crossed, in May.

I’m also excited to be joining the Melodic Distraction team at Gottwood this year and I’m planning to try and immerse myself more within the electronic music scene of the North of England. There’s a lot of exciting things happening at the moment and I’m keen to get more hands on, than I have been for the past few years, particularly in regards to my visual practice.