We know you’re all hibernating this January, but unless you’ve literally been sleeping under a rock, you’ll know that our favourite independent record store Dig Vinyl are having a change of scenery! 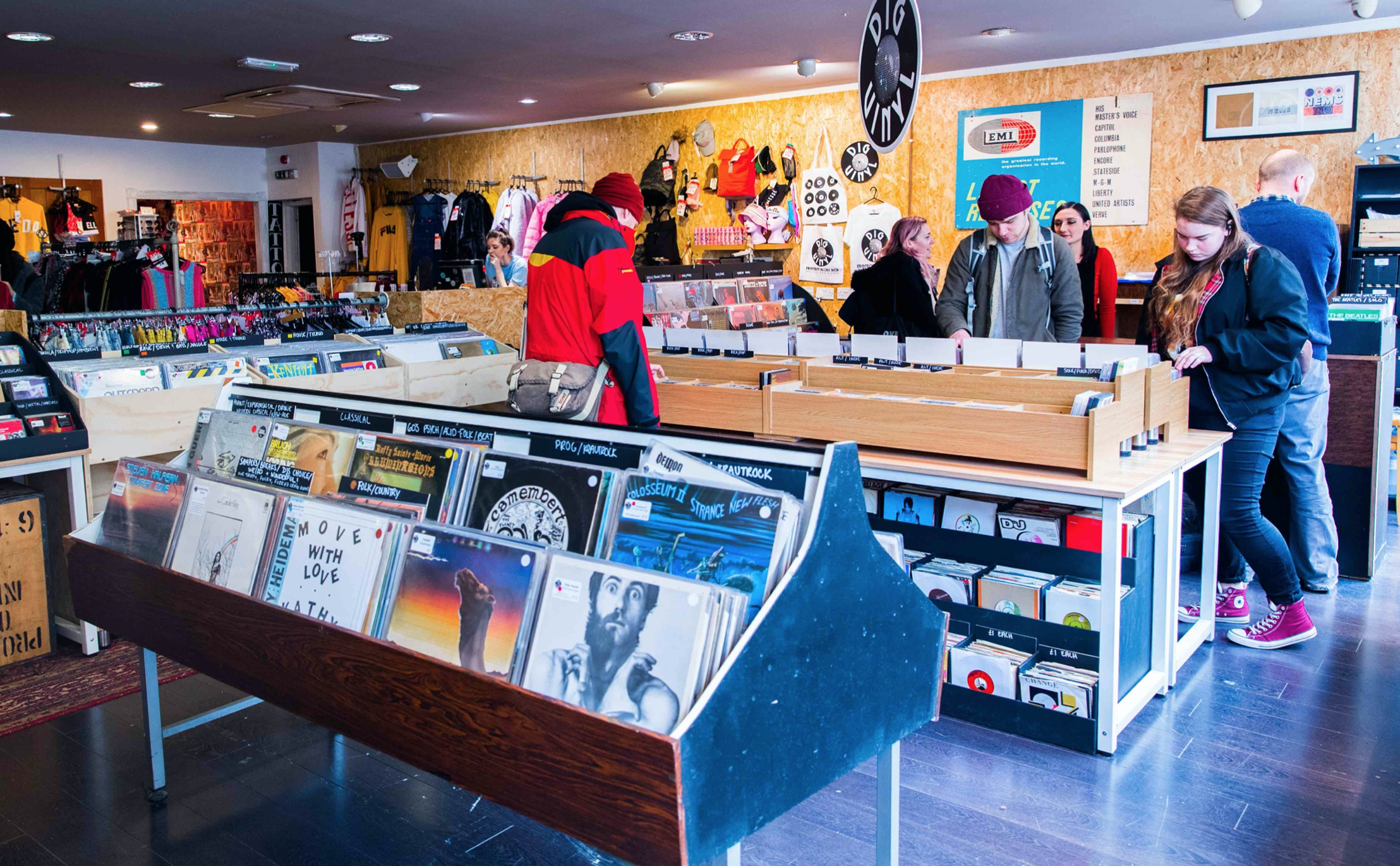 As much as we loved their cosy basement beneath Soho’s, it’s undeniable that since they opened in 2014, Dig Vinyl have done nothing but grow – both as a business and in our hearts. As they approach their 5th birthday, naturally the time has come to relocate to an even bigger space. Still to be based on the beloved, bustling Bold Street, you can now sift through Dig Vinyl’s eclectic collection a few doors further down on the first floor of Resurrection.

Having been championed by the likes of Clash Magazine, The Skinny and The Guardian, Dig Vinyl are sending out vibrations not just through our city but across the nation. Back in 2014, it felt like the vinyl medium was dying out with only a couple of other record shops left standing in the city. Co-owner Carl Emery worries that: “In current times, the places for people just to hang out are vanishing. Yet when I was younger hanging out in record shops was a vital part of my education”. And so Dig Vinyl was born – a place designed “for people who love music to congregate, dream, share and imagine new ideas from”. Since then, 4 more record shops have opened in Liverpool and the surge in popularity isn’t slowing down – global trends show a 28.8% increase in vinyl purchases over the past two years. Walk into Dig Vinyl on a typical Saturday afternoon and you’re met with pockets of people of all ages, genders, styles and backgrounds. Groups of friends just having a browse, experienced crate diggers who know they’ll find the rare gem they’re hunting for, or families on a day out who “had no idea this was down here!” – Dig has something for everyone.

Being exclusively second-hand, a vast knowledge of music with attention to condition of records is crucial. Between Carl and fellow owner Anthony Nyland, they have spent the last 35 years within the music industry as DJs, label owners, band members and shop workers. Carl adds “when I stand in front of our house/techno section I personally have to go ‘wow’, otherwise it’s not good enough! It’s the same for Anthony with the alternative/indie world”. You can be sure that each staff member is also deeply connected to different elements of the music scene. Sales Manager Elliot Hutchinson says “we’ve been described on a number of occasions as one of the most extensive choices in the North West for second-hand record shopping. We stock everything from spiritual jazz to contemporary dance music, alongside more accessible sections like classic rock, punk and synth-pop.” As well as their huge selection of both old and new LPs and 7”s, Elliot adds that “with multiple expansions, we’ve been able to offer more in the way of CDs, books and collectible cassettes!” So, who knows what else we can expect from the store with yet another expansion? 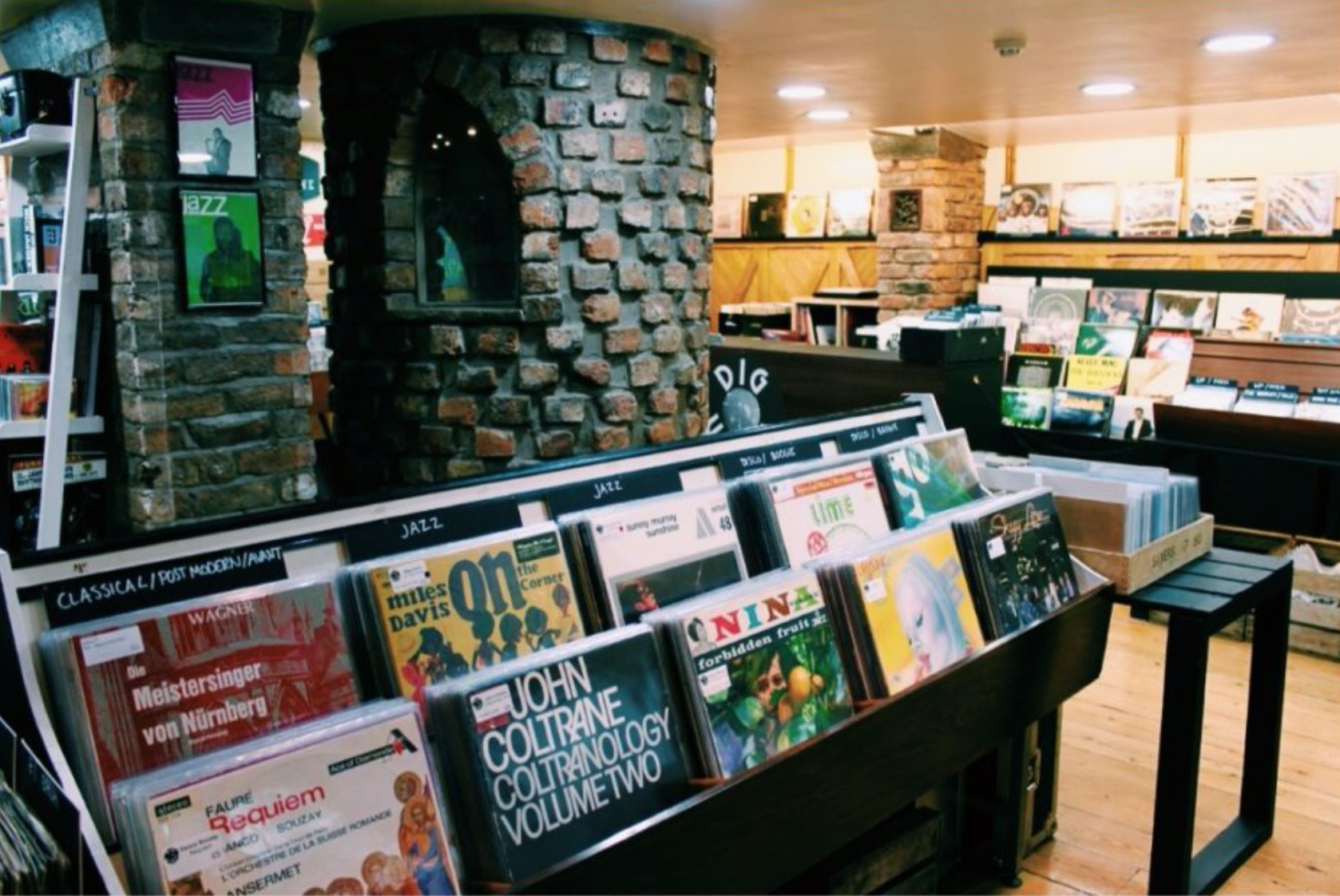 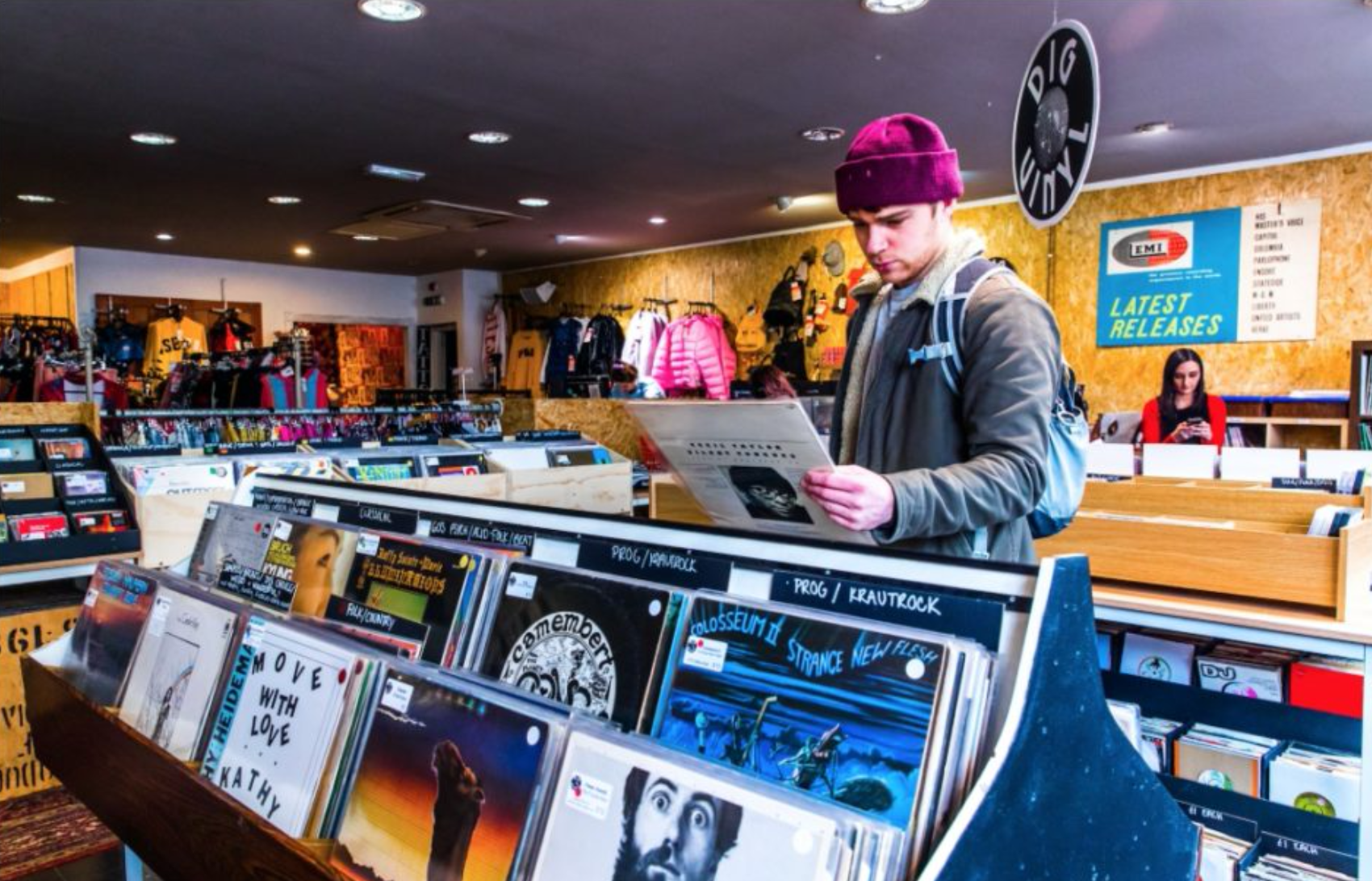 As you walk up the stairs you can hear the distant comforting crackle of the record player. Upon entering the space, the first thing you notice are the huge windows, something Carl was most excited about: “It’s a great space, airy, open and smart”. Without a doubt the most notable difference, the natural light is a welcome change, with eventual plans to have in-store DJs doing sets in the window and overlooking Bold Street. Love from the old space is poured into the new with our favourite jazz, rock & pop, dance and of course the ‘weird and wonderful! Our trippy, folky, fuzzed crate gems’ sections still available, only this time with more stock in each. The bargain bins (£1-3 LPs) are at your feet, so more space to really rummage. The listening post now overlooks the other half of the room (women’s vintage clothes), but Carl said we can expect “an extra listening post and more Dig merchandise” (in addition to the already popular t-shirts, slip mats, tote bags and badges).

One thing that hasn’t changed, though, is the warm and welcoming atmosphere. The friendly staff are on-hand and eager to inform/broaden your musical horizons if you seek it. Their passion and enthusiasm allows them to offer personal one-to-ones with customers, guiding them through their record hunt and just generally talking music, building rapport and even forming friendships. 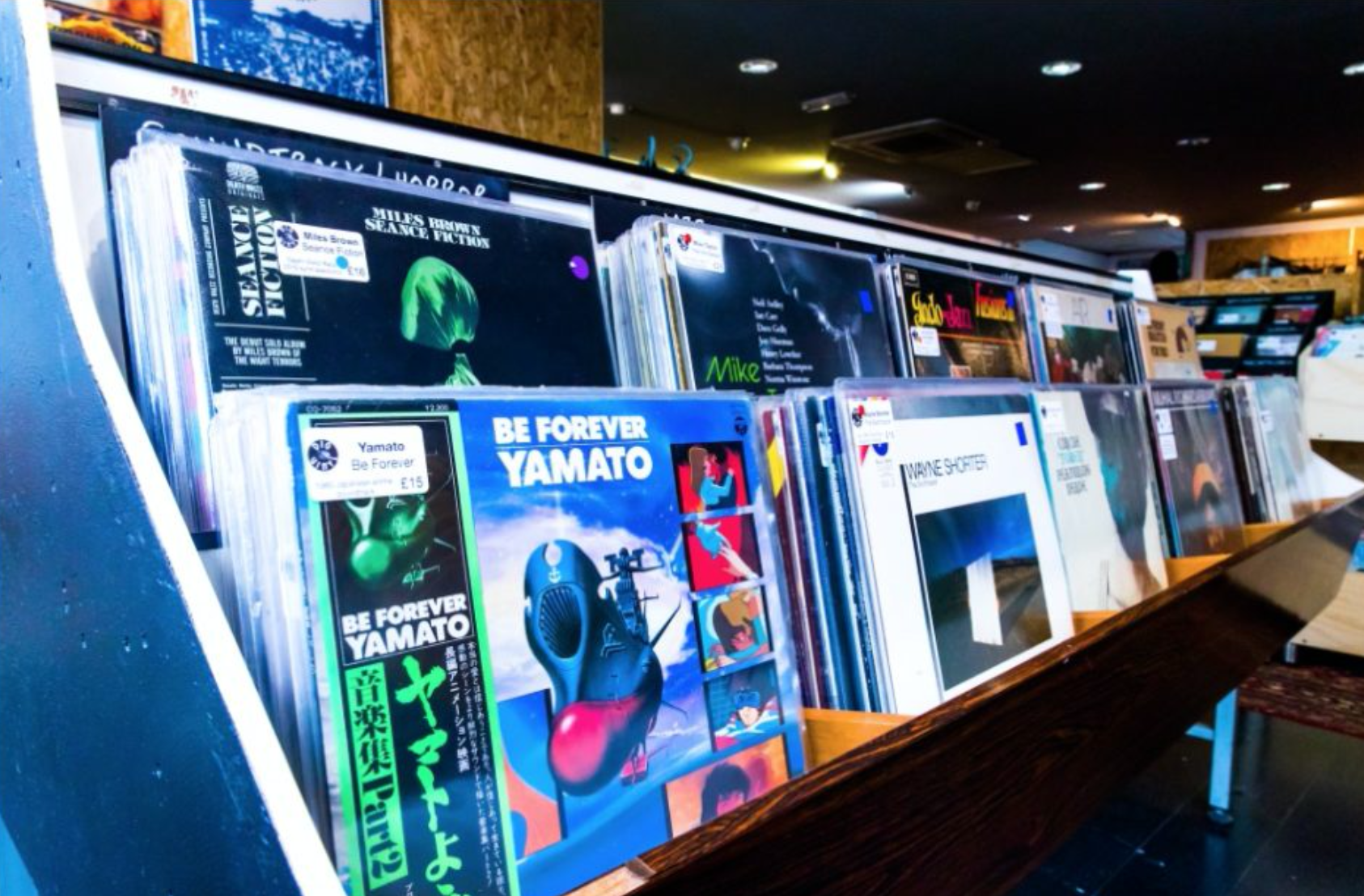 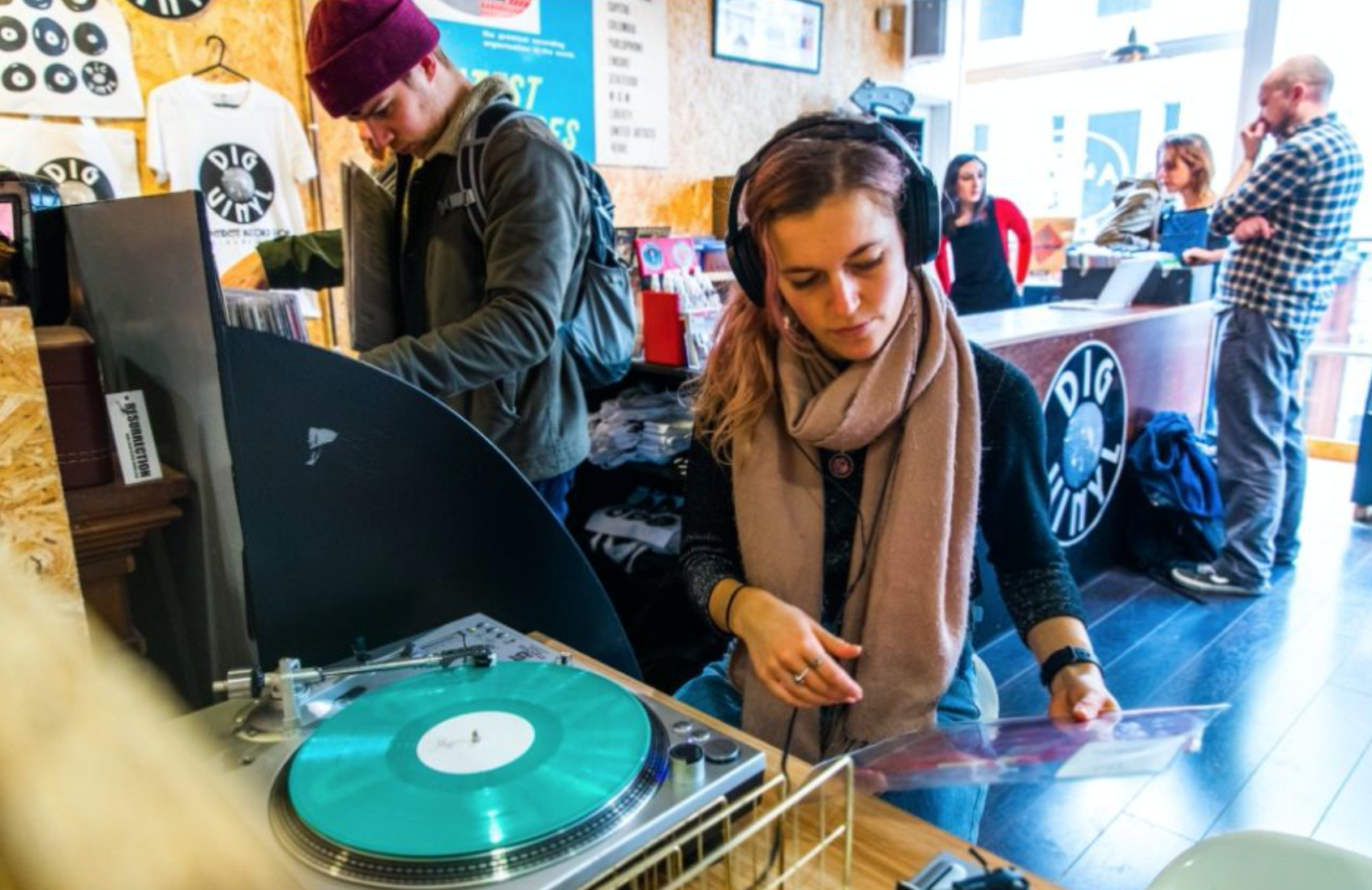 Each staff member, however, is much more than just a smiling face. Championing women and their role within record shops and the music industry, Dig is home to three ladies who also have ventures of their own. As well as managing the on-site record shop at festivals, Shop Manager Yvonne Page has been a panellist at events such as a feminist film screening. Our very own radio station manager Nina Franklin, who cherishes the dance section like it were her own child, also DJs and puts on events. Finally, newest recruit Johanna Wilson operates as screen-printing artist ‘That Girl’.

Representing the lads, Elliot Hutchinson and Al Sundvall also have their fingers in other musical pies. Elliot regularly DJs and is co-founder of club night Howling Rhythm, while Al manages a couple of music artists as well as playing guitar in his own band Bonnacons of Doom. Their experience in DJing has enabled the team to curate a special, hand-picked DJ section. This fills yet another hole for underground digging in Liverpool and is something Elliot is keen to expand on in the new space, “linking in with radio-broadcasting and in-store sets from touring selectors”. Dig also supports local musicians, with co-founder Anthony adding that “there’s no limit to what we will sell from local artists”. Dig Vinyl have also started their own monthly podcast which you can listen to below:

It is clear that Dig Vinyl is not just another record shop – it’s a culture that is lived and breathed by the people behind it. Carl enthuses that “myself and Anthony spend hours each week exploring local basements, meeting with old musician contacts and travelling to obscure places to seek out the best stock we can”. Re-opening today (Friday 25th January), make sure you visit Dig Vinyl in their new home, Resurrection 1st Floor (27-29 Bold Street). 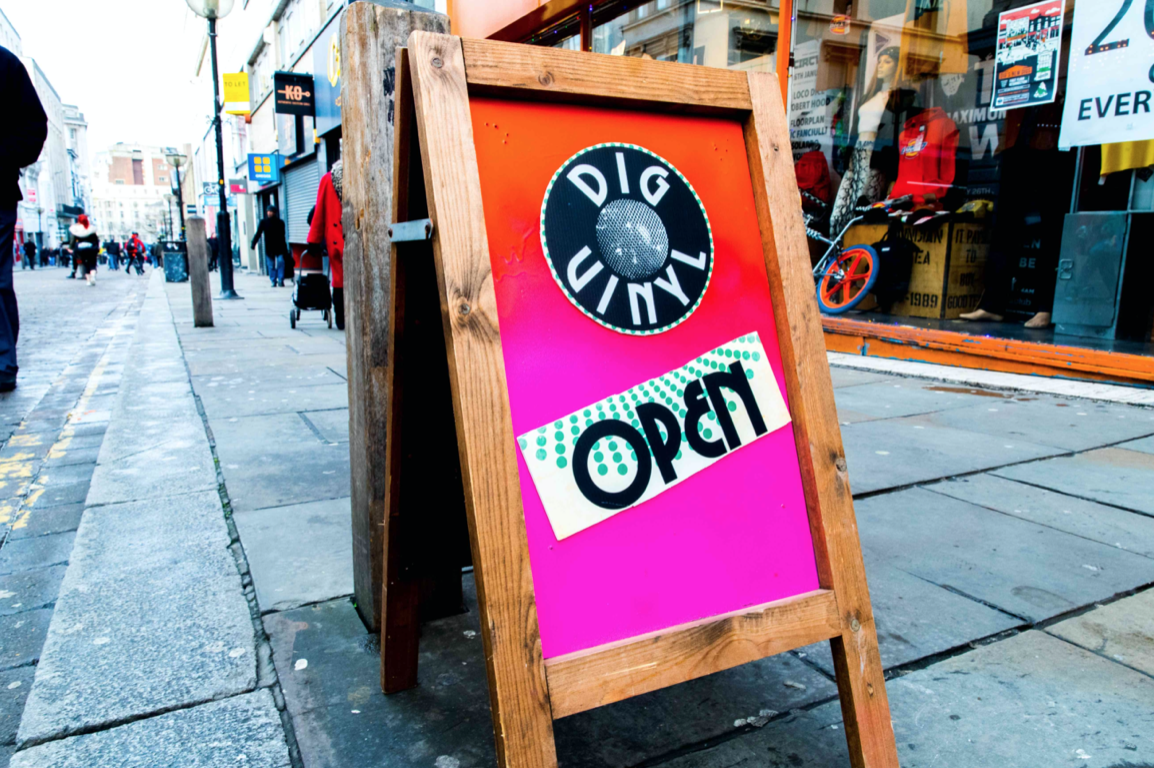 All images courtesy of Film Fallon.