Backtracks; a series from Melodic Distraction dipping back into the archives in search of tracks that shifted the electronic music landscape.

With each edition, we invite an artist or DJ to share their favourite tracks and the history behind them. For this edition Vish Matre of Dar Disku Records, the record label making waves for their reinterpretations of Middle Eastern dance records, highlights the importance of Omar Souleyman in breaking the eurocentricity of contemporary dance music!

As a true lover of music, I constantly search for moments which leave me speechless. You know…that feeling where everything freezes and you are left unable to fathom what is happening. Be it on a dancefloor, alone in a record store or even just lying on your bed with some headphones on. The moment where everything just feels right. Goosebumps over your arms and your eyes shut. This is what happened the first time I heard ‘Wenu Wenu’ by Omar Souleyman.

There are few tracks that have totally flipped musical culture on its head. ‘Wenu Wenu’ is one of them. Originally released in 2013 and co-signed by Four Tet aka Kieran Hebden, this song was a force to be reckoned with. It was very hard to ever imagine a Syrian wedding classic being played on the fields of Glastonbury or in trendy east London festival, but somehow, this track travelled across continents and found itself on the USB of every DJ I know. The first time I heard it was at a London festival in 2014 where Omar was playing on a small stage early in the afternoon. His ex-keyboard player Rizan Said, graced the stage first and played a few scales in rapid succession to test if everything was working. The backing track started with some incredibly powerful stabs and out walked Omar.

It was the first time I had ever heard ‘Dabke’ played outside of the Middle East (where I grew up) and the rhythmic aspect was the first thing that grabbed me. Pounding kick drums layered with hypnotic tambourines, gelled together with the razor sharp lead synths. Almost immediately, the call and response vocals magically were transported into the minds of the predominantly white, non Arabic speaking audience and by the second repetition the crowd were yelling back ‘Wenu Wenu (Where is She? Where is She?) The one I loved where is she’ in a perfect Arabic accent. Standing at almost seven minutes in length, the song is a rollercoaster ride through the parallel rave universe in the Middle East. Each repetition, movement, call and response seems to kick up the energy of the track more and more. By the time you have reached the end, you just want to get back on and do it all over again.

Since this moment, the song has cemented itself in club culture across the world and has become the one track which can easily turn a crowd insane. Personally, seeing the ‘too cool for school’ London crowd starting to remove items of clothing and screaming, was a moment I’ll never forget.

Last year, Omar was playing in Bristol and my Bahraini friends ‘Flamingods’ were supporting him. They asked if I wanted to come down…of course I did. I nervously walked from my house to the venue, downing beers en route in excitement. This would be the first time I saw Omar since that day in 2014. I get to the box office and say “Vish” and the promoter hands me a laminate. Sweet! “I might even be able to meet him”, I thought to myself. 20 minutes to stage, and I’m standing backstage with the guys and I feel a tap on my shoulder. It’s Omar asking for a lighter. We all go outside and have a smoke together minutes before he goes on stage. His keyboard player hops on. Plays some scales in rapid succession to check if everything was working. The backing track for ‘Wenu Wenu’ starts. I’m wedged between my friends and some local Syrian taxi drivers I met in the queue, who have been waiting to see Omar for over 15 years. Omar roars “Yallaaaaah!” and the rest?….I couldn’t tell you. I couldn’t even fathom what was happening. 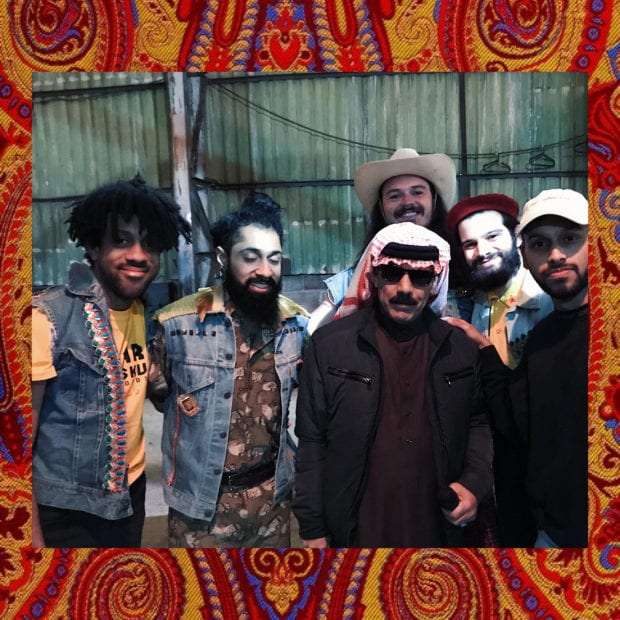