Backtracks; a series from Melodic Distraction dipping back into the archives in search of tracks that shifted the electronic music landscape. With each edition, we invite a local artist or DJ to share their most impactful music and the history behind it. For this edition, Richie Anderson, music researcher and host of “The Goldarndest Mixtapes”, looks into the 303 and 909 sounds that became synonymous with the early 90s’ UK techno scene, epitomised by Hardfloor’s barnstorming record ‘Acperience 1.’ 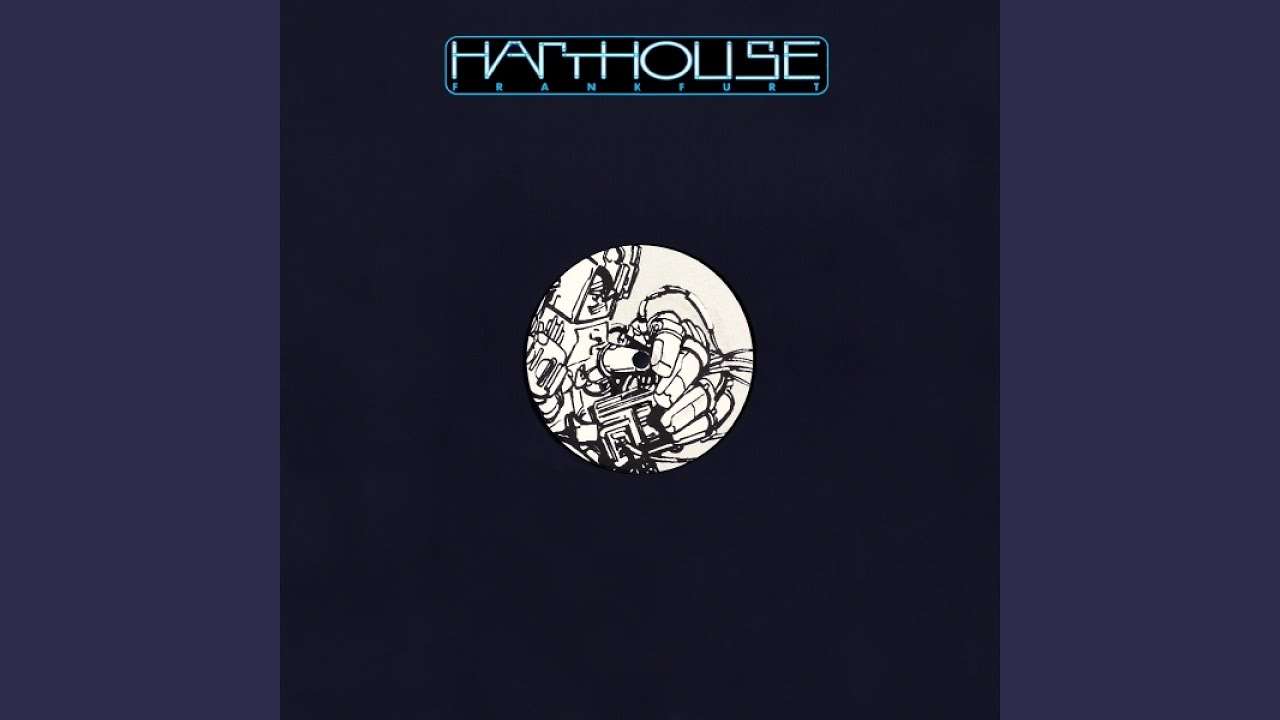 Writing about one track which has “shifted the electronic music landscape” is tricky in the best of times…and these are not the best of times. The physicality of our cities’ dance music scenes lie abandoned. Everything seems surreal. Things that seemed so important only a few months ago now seem strangely irrelevant. Can we talk about dance music in a time of coronavirus?

Were it not for the pandemic, my adopted home city of Liverpool would imminently be hosting events by two promoters: 303 and 909. Named after the numerical monikers of the eponymous TR909 drum machine and TB303 bass synthesizer, their parties set in eclectic venues over the last decade have gone some way towards recreating the feel of the early 90s’ UK techno scene. That 303 and 909 sound became synonymous with techno and acid subgenres and it is a tune from that era, one that soundtracked my own immersion into dance music, ‘Acperience 1’ by Hardfloor, that I’ve chosen to write about.

Hardfloor is comprised of Oliver Bondzio and Ramon Zenker. They began working together in Dusseldorf in the early 90s, though Zenker had experience in producing a variety of musical styles prior to this and worked in a recording studio. The duo work together to this day. Most of their material was released through Sven Väth’s label Harthouse, a sub label of Eye Q, which had good distribution networked through WEA. At this point in time in the early nineties, German labels had been releasing techno material from Detroit for a few years. Clubs such as Tresor in Berlin and Frankfurt’s Dorian Gray were well established and a new generation of young German producers, along with those in Belgium, were at the forefront of a European techno sound. Harthouse had already released imprints by Arpeggiators, Barbarella (Ralf Hildenbeutel and Sven Väth), Marco Zaffarano and Spicelab (Oliver Lieb).

In 1992 Harthouse released HH008, the ‘Hardtrance Acperience EP’ by Hardfloor. It contained four tracks: Acperience 1 – 4. Supposedly titled as a compression of the words ‘Acid’ and ‘Experience,’ each track is dominated exclusively by the sound of 303 synthesizers. However, ‘Acperience 1’, at 9 minutes long stands out from the other tracks on the EP. By a mile. Acperience 1 has an arc, a journey. Layered arpeggios and melodies from the 303s build up, drop down and rise again with snare rolls over a searing synth string line.

Hardfloor assembled these elements… though it had all been done before. In Chicago and Detroit, even in London. There was nothing exceptionally unique or ground-breaking about this release. Yet arguably this style has not been bettered since. In this track they managed to condense the very essence of acid and trance and crafted the formal blueprint for the anthemic, euphoric pinnacle of a techno night. 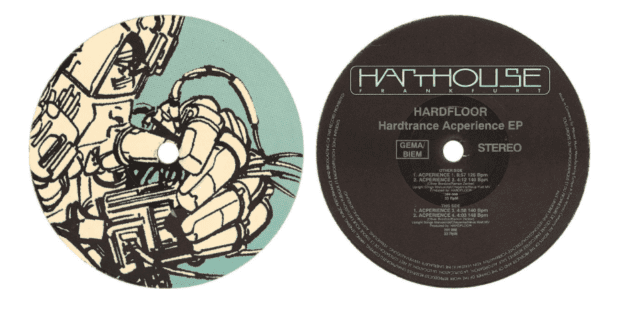 I can’t remember where exactly I first heard ‘Acperience 1’. I was living in Leeds in ’92 and had just started going to clubs and was making techno in a duo myself. It could have been on a cassette mixtape, or at the home of some DJ friends. But it was at an ‘Orbit’ night at the Afterdark club in Morley, a few miles south of Leeds city centre, probably in ‘93 that I experienced the power of ‘Acperience 1’.

Afterdark had a circular dancefloor, banked with a ringed balcony. The DJ booth was perched high up on a podium column. By this point in time, Orbit was attracting big names to DJ there. Jeff Mills, Joey Beltram,  Sven Väth, CJ Bolland to name a few. People would travel from all over the country to be there. There was a tiny pub across the road. Few would enter for a drink. Most would prefer to shiver in the queue for the club’s 8pm opening. Accents from as far afield as Glasgow and Birmingham were common. Just after 8pm and the dancefloor would already be moving. People started immediately, acutely aware of maximising the next 4 hours. Orbit nights have become somewhat legendary. For good reason.

I can’t remember which DJs played ‘Acperience 1’. It was a regular. The place would be guaranteed to go wild so the track would often end the night. The place was drenched with sweat which would rain down from the venue’s high ceiling. By this point the ‘shirts off posse’ would be at the peak of their energetic bliss. The collective smiles of hundreds of us, lost in the timeless energy of this track.

So what made ‘Acperience 1’ so good, why did it elicit such reactions? After all, all of the elements had been used before. 303 basslines atop 909 percussion. Even then this track could have been described as retro. There were already hundreds of such tracks.

The track opens with a booming tone like 808 kick drum, which is then layered with a dry 909 kick with a fast attack and more mid-range frequencies which give it a hard punch. It seems initially like a straight 4/4 but there’s a 16th note ‘flam’ at the end of each fourth bar in an 8 bar pattern. It shuffles. The first 303 sequence with a 2 note falling interval emphasises this flam and the ‘one beat’, though in an offset way. The 303 line then answers this with a 3 note arpeggio. These elements are the first of the track’s many ‘hooks’ as Detroit’s Kevin Saunderson would say: musical elements which listeners, and especially dancers can latch onto, when experiencing repetitive instrumental music.

Really standard techno high hats courtesy of a 909 enter next, with the open high hat accenting the ‘and’ off-beat, while the faster closed high hats increase the track’s urgency.  Another 303 enters after about a minute and a half. This one is distorted and after initially emphasising the off-beat, the 303’s distinctive ‘accent’ knob is used to open up more frequencies into the melody. By now this is an interplay – a counterpoint of multiple synth hooks from the 303s. The track is really going somewhere. 909 rimshots and 808 cowbells are added creating percussive call and answers. The weaving lines of the 303’s are being manipulated extensively. There’s a YouTube video (See below) from the ‘90’s of Hardfloor performing this live in which they can be seen twisting the knobs of at least three synths simultaneously; in particular increasing the cut off frequency and resonance to bring forth the distinctive ‘squidge’ so unique to the 303.

A string line is gradually faded in. This high-pitched single note (a standard pop music trick, using the 3rd or 7th note of the key) creates an unresolved tension, and runs almost continuously to the end of the track. What does differentiate this track from many in the genre is the limited use of snares. There is only a subtle use of snares to emphasise the 2nd and 4th beats. Instead snares emerge in a roll after three minutes to raise the track to a crescendo and are then used with 909 cymbal crashes to pound home the 1st and 2nd beats of the bar.

Just over half-way through all percussion drops out; a further synth line melody is introduced; and echo delays are added to the 303s. There’s interplay between at least three 303’s here, maybe more. Some have said Hardfloor use up to six 303s on some tracks! It’s hard to differentiate from the mesh of timbres. Suffice to say multiple 303s are in conversation, the synths string lines build an atmospheric relief before the listener is drawn back to the peak with a further roll of snares. Rapid 909 claps, more cowbells, cymbals, snare rolls all bringing the track rolling in and out of dropdowns, raising the tension in tandem as the 303 rises in intensity over the next few minutes.

At 8 mins percussion drops again, hinting at another crescendo return to peak, but this never materialises. Instead, the wash of synth counterpoint fades away over the course of a minute. Often DJs with two copies would bring the track back in here and prolong the manic sequence of tension drops and building crescendos.

And, every element described here has been used again and again since. Critics might rail against Hardfloor as the flag bearers of huge lengthy breakdowns and rising snare-rushes which became virtually ubiquitous in techno. The influence of this track’s features is clearly heard, not just in productions, but in the way DJs manipulate drop downs and buildups. Hardfloor didn’t invent this stuff, but in this track, they captured a mastery of it. Whilst clearly sonically located in the 90’s there is a timelessness element to ‘Acperience 1’. To this day it epitomises the peak experience of techno clubbing. If there were to exist a ‘canon’ for techno, then surely this track would feature. As is so often the case with successful works, especially within cultures that fetishise the rare and unique, many DJs might steer clear from using this track in a set. Yet, I have never seen it played to anything but dancers lost to wild abandon.

Soon come the time when I can experience again the collective smiles dancing around me as this track peaks.