Travel. One of the greatest challenges facing a DJ or music selector is travel; to take oneself out of the familiar, to jump into a whole new realm and provide a soundtrack for strangers to dance and enjoy. It’s a talent often defined by expeditious curation, a musical conversation between the selector and the emotional responses of discerning listeners across the world. This manner of DJing has become so popular, in fact, that Resident Advisor have taken to documenting the lives of several touring artists in their series, Between the Beats. Following the likes of Nina Kraviz and The Black Madonna, the series examines the pitfalls of sleepless nights, daily flights and performing in front of several dancefloors a week. But with a revolving door of audiences to impress, DJs might slip into over-honing their sets, following a set formula for success and musical euphoria among their listeners.

It is within the context of this ever-evolving culture of fast-paced movement that we have seen a notable decline in something more nuanced – the residency. To perform for multiple audiences in a weekend is a physical, mental and musical feat, there’s no denying that. But to deliver new experiences to the same audience, week-in-week-out, poses an entirely different challenge. The longest running residency in the UK belongs to Glaswegian DJs, Harri & Domenic. Clocking in over 20 years of their weekly party at the legendary Sub Club, the pair have soundtracked the space since the mid 90s. Always on their toes, the veteran DJs are posed with a problem unique to residents; to continually advance their sound and provoke their regular audience in the same way that touring DJs must entertain a multitude of dancefloors. But what if we look further back than this? Where are the longest residencies held and how have they captured their audiences over the decades?

Since 1933, the legendary Yokohama-based jazz café, Chigusa, has been providing regular listeners with a space to come together and enjoy music from a selection of over 3000 records. Until his death in 1993, the café’s owner and curator, Mamoru Yoshida, stood behind the counter engaging in the very same musical conversation that the world’s most venerated touring DJs engage in each weekend. In this context,  the process of curation transcends the environment in which the music selector operates, with the ethos of soundtracking an audience’s experience more important than platforming or giving space. The sharing of music between selector and audience nurtures musical discovery regardless of whether you choose to shuffle away on a 4-AM dancefloor or sit in an intimately-sized café. James Catchpole, curator of Tokyo Jazz Joints writes: “The jazz café culture in Japan grew organically in the years after WWII, as venues where fans could gather and listen to the latest records from the United States and Europe. The act of going to a jazz café and listening to a new release in a social setting became the norm for a generation of urban Japanese.” The process of sharing an experience and discovering new sounds as a community of listeners is exactly what has driven both club culture and the experience of jazz kissa over all these years. 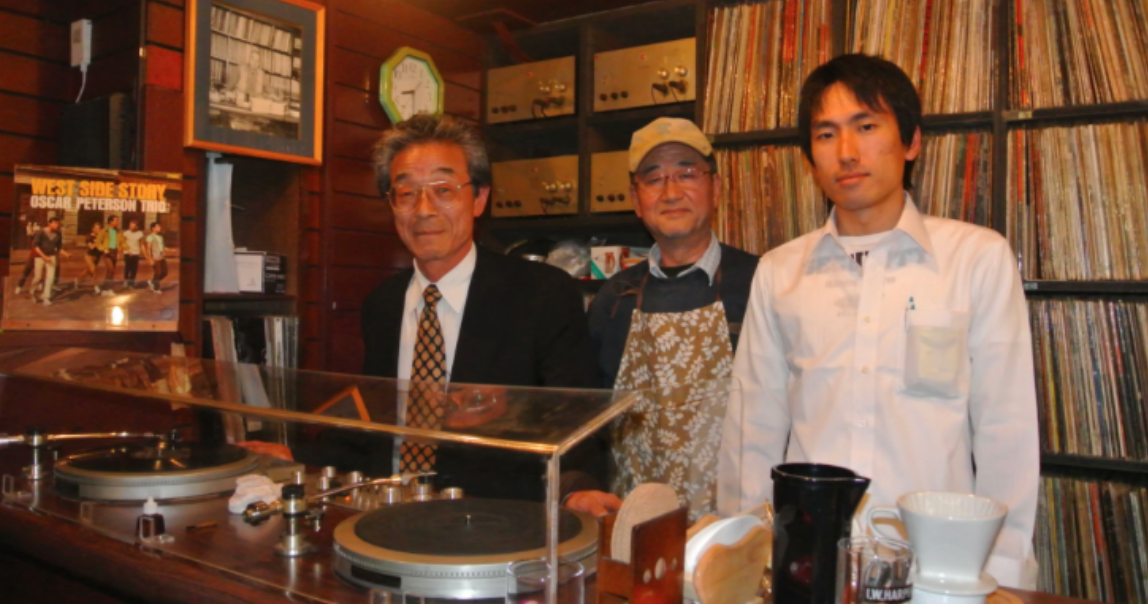 Enduring a world war, the rise and fall of the Soviet Union and nineteen Fifa World Cups, the Chigusa jazz café in Yokohama can arguably be considered among one of the longest-standing residencies in history. The astounding thing is that this café – and Yoshida’s part in it – does not stand alone. Jazz cafés or ‘kissa’, as they are known in Japan, are a long-standing tradition with many having stood in the same place since the 1930s or 40s. Their owners are veteran music selectors, playing treasured and often rare records through bespoke, hand-crafted sound systems. Whilst the jazz kissa are now disappearing from the city streets of Japan, Tokyo still plays host to 130 of these jazz cafés and bars, some with sitting space for just ten or so customers and some capable of hosting complete band performances.

Another legendary spot is the Shinjuku-based, Jazz Pub Michaux. With the kissa’s owner now into his late seventies, Michaux, holds a jaw-dropping collection of over 4,500 records of hard-bop and soul-jazz alone, and with a stellar collection of rare wax on regular rotation. The Tokyo Jazz Site blog describe this as likely the largest record collection in Tokyo, with “a jaw dropping total of 10,000 records” on-site. Jazz Pub Michaux and Chigusa are just two out of hundreds of these spaces; still existing despite the increasing pressures of city-centre rents, gentrification and the increasing spending power of fans who now can take the music into their homes with digital streaming. The kissa stand not as relics of a bygone era, but a proud reminder that music is to be shared among a community of listeners and their endurance into the 21st century stand as testament to a culture that still understands this concept. As the art of DJing continues to spiral into the eye of mainstream culture, and gladly so, we must remind ourselves that there are other musical worlds still to explore, even if they live down a Tokyo side-street.

In honour of the Japanese jazz café, Liverpool-based jazz heads, Anti-Social Jazz Club, are hosting a four-day-long event in celebration of the jazz kissa. Creating a pop-up jazz café inside Hardman Street’s Buyers Club, Kinkajou will include an exhibition of photographer James Catchpole’s documentation of Japan’s kissa on Thursday. An “Ode to Richie Barton, Vinyl Only DJ Set,” will take place on Friday night with the legendary record collector honoured by some of the North West’s jazz DJs. Saturday night will see live performances from selected bands including The Blind Monk Trio and Harambe Maoni, as well as DJ sets from more of the city’s finest. Sunday will showcase more of the same as selectors take to the decks to soundtrack the best of Blue Note as the brunch club rolls on. A vinyl fair on Sunday afternoon rounds off the event nicely.

For more information, head over to the Anti Social Jazz Club and Tokyo Jazz Joints websites, linked below. Both are committed members of the global jazz community and champion both the past and the future of jazz in their respective fields.