This week we head to Brazil via Leeds, for a chat with 9-piece ensemble Tempo Feliz! Performing exciting original compositions and electrifying arrangements of Brazilian classics right here in the North West, Tempo Feliz are collectively inspired by the rich and multi-faceted landscape of Brazil. Fresh from releasing their debut album ‘Respirar’ on HPBC Records, we dive into their fusion of funk, soul and Brazilian percussion styles, as well as the dance-floor ready remixes from Charles Vaughan, SIBSON and Aroop Roy. 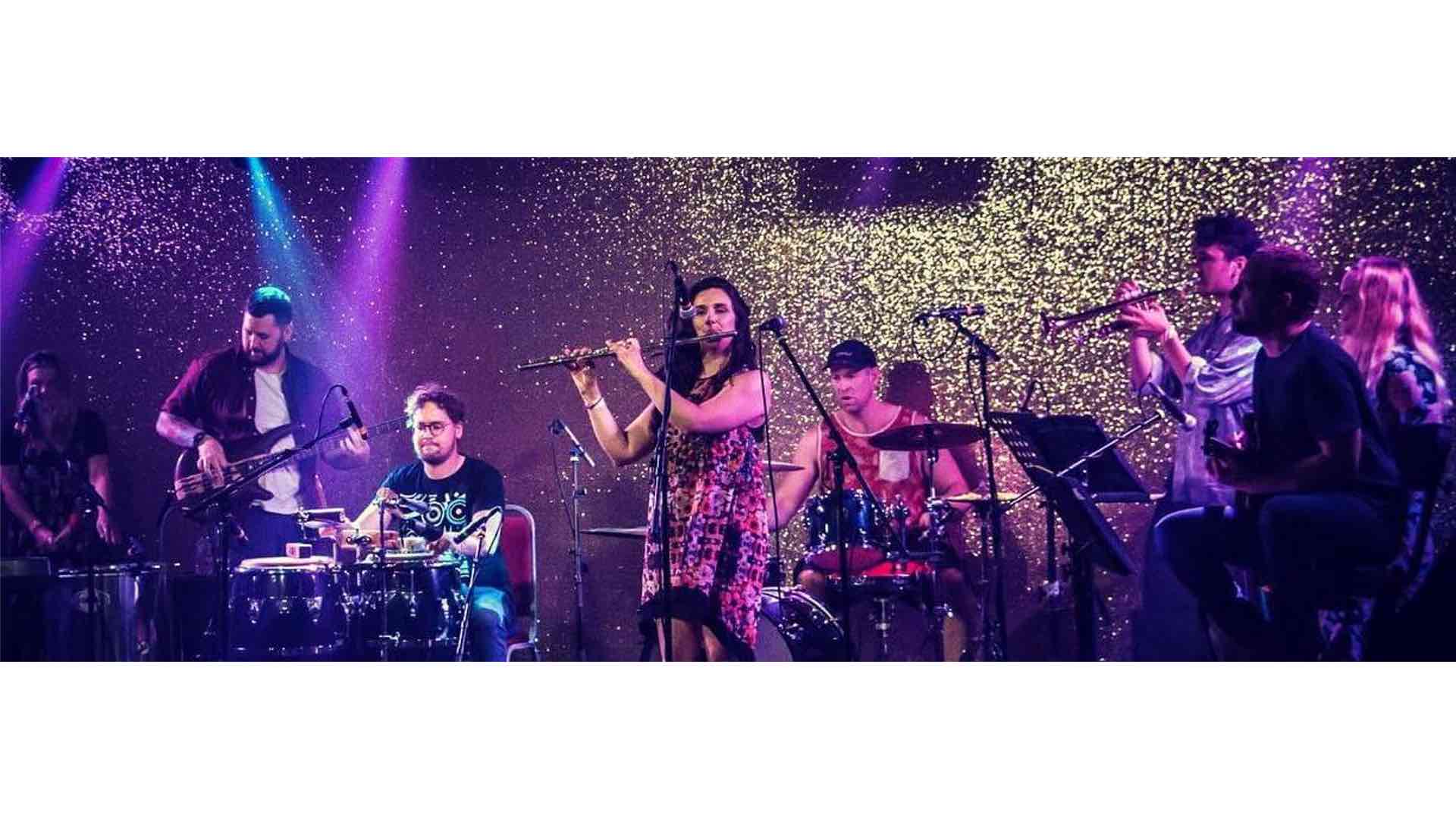 Hi guys, we can’t get enough of debut album ‘Respirar’. Can you tell us a bit about the process of making the album?

Richard: Glad you’re enjoying it! We started making the album in 2019, but due to the pandemic we had real difficulty finishing the project. So it’s been amazing to finally get it out there for people to listen to.

Our saxophonist on the album, Henry Weekes, was a big part of getting the album together. He hooked us up with our producer, Dom Richmond, and introduced us to some amazing DJs who remixed some of our tunes for the project.

We’ve just recently played our album launch event at the Brudenell Social Club, Leeds. It was hosted by the brilliant DJ and promoter, Lubi Jovanovic. We had such a great evening and the crowd really responded well to our music.

Richard: The main theme that runs through our music is Brazilian percussion. We all love Brazilian music, whether that’s samba, MPB, bossa nova… the list goes on! So most of our tunes are based around Brazil-influenced rhythmic ideas. We also incorporate elements of funk, soul, disco and afrobeat. Put that all together and you have something really colourful that makes you want to dance. It’s very fun music, and we all really enjoy playing it.

How do you find working as a 9 piece? Are there any challenges being part of a bigger group?

Richard: Being in a large band is fantastic because you have so much to work with musically. The potential for arranging the music is endless as you have so many other players to draw inspiration from. The scope for harmonisation, layering rhythms and dynamic contrast is amazing. It’s a great environment to be creative in.

The hard part is balancing everyone’s availability! Having so many people to coordinate isn’t easy, and finding suitable rehearsal time is always a challenge. One thing I’m finding to be essential in the process is documenting all the music on a score. Over lockdown, rehearsal time was very limited, so I put a lot of effort into making sure our whole repertoire was written down on sheet music. It’s the fastest and most efficient way to communicate musical ideas, and you really need to be able to do that if you’re short on rehearsal time.

The album also features 3 remixes from SIBSON, Charles Vaughan & Aroop Roy. How did the remixes transform the originals? What were you hoping they might enhance or make different?

Caroline: The remixes have enhanced the album by making it more versatile and multi-textured. They have really captured the atmosphere of the originals, but added other cool electronic elements in there as well. The SIBSON remix of Respirar and Charles Vaughan’s remix of Na Brisa instantly serve that summer vibe! For Beija Flor, we’ve always said that it would lend itself to a remix, so we were delighted that Aroop Roy elevated the track to a dance floor filler.

The artwork is gorgeous – who designed it and what are the ideas behind it?

Richard: The artwork is great! There’s a Leeds-based designer called Johnny Cosmic & The Midnight Vipers, and the main concept for the cover came from him. The little bird on the album is a nod to our song, Beija Flor, which means ‘hummingbird’ in Brazilian Portuguese. I love any artwork that’s colourful and psychedelic, so we were fans straight away. We’ve had lots of great feedback about it. 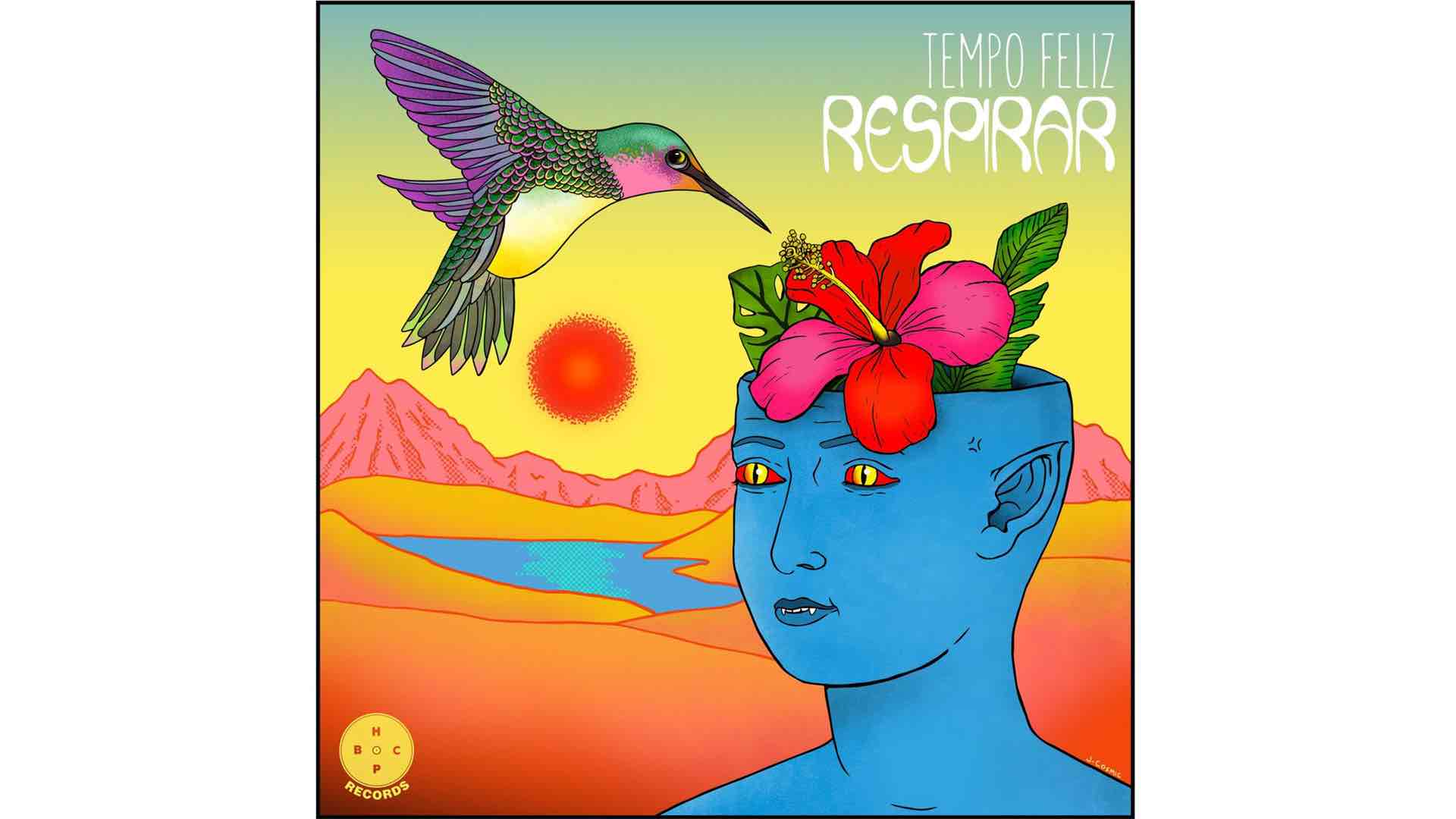 Who have you been listening to a lot whilst making the record?

Richard: For me, Jorge Ben has always been one of my all time favourite Brazilian songwriters. He has such a gift for writing melodies and was certainly a massive inspiration to me when creating tunes for the album. Alongside Jorge Ben, my guitar hero is the great Baden Powell. We’ve covered quite a bit of Baden’s material, and I’m sure to have been listening to him at some point when recording Respirar!

As a group we all listen to a range of Brazilian music: Os originais do samba, Banda Black Rio, Zé Roberto, Rosinha de Valença, Bixiga 70, Edu Lobo (we feature a cover of his song, Zambi, on the album), and loads more.

Can you tell us a bit about the jazz scene in Leeds? Do your surroundings have much of an impact on your music?

Richard: The jazz scene in Leeds is fantastic. We were featured on a Worldwide FM show recently, and the whole programme focussed on new jazz music coming out of Leeds. There are so many brilliant bands, and a huge contributing factor to that is the Leeds Conservatoire. The college specialises in Jazz, so the city is full of young talented players, and this means there’s plenty of great venues to play in too.

The fact that the jazz scene is so thriving here definitely influences us and helps keep the band moving forward, no doubt about it!

Where would be your dream venue to perform these songs in?

Caroline: As a large band we’re always looking to play on big stages. Our music is very upbeat and something people can really dance to, so our ambition is to perform these songs at more festivals across the country, and even internationally. We’re really pleased to see some festivals starting up again as the industry has taken a huge hit during the past year. Performing these songs on a stage at WOMAD, for example, would be a dream come true.

What is it about your music that you hope resonates with people?

Caroline: Our band name ‘Tempo Feliz’ translates to ‘happy time’ in Brazilian Portuguese. We hope that the music is able to uplift people, and that listening and dancing to it brings them joy and happiness. It’s really fun and playful music; with all the different layers of rhythm and harmony, people can delve a little deeper into the music and discover a new element with each listen. We really hope people enjoy the album and that the rhythmic ideas and grooves inspire people to explore Brazilian music more.

Caroline: We have some more live gigs coming up and we’re really looking forward to playing on stage regularly again after this time off! Our main aim is to promote the album more and reach more people, so part of that is showcasing the album live alongside our other new material.

‘Respirar’ is out now on HPBC Records – buy/stream below!