We’re doing something a lil different this week and sitting down with author and professional raver, Jim Ottewill! Jim has just published his first book ‘Out of Space: How UK Cities Shaped Rave Culture’ with electronic music & club culture book publisher Velocity Press. The book is a course through the different UK towns and cities club culture has found a home. From Glasgow to Margate via Manchester, Sheffield and unlikely dance music meccas such as Coalville and Todmorden, his book maps where electronic music has thrived, and where it might be headed next. Alongside this, Jim is a freelance music journalist for the likes of Mixmag and Resident Advisor, as well as DJing in Sheffield and Berlin. We join Jim on a deep dive into today’s rave culture below… 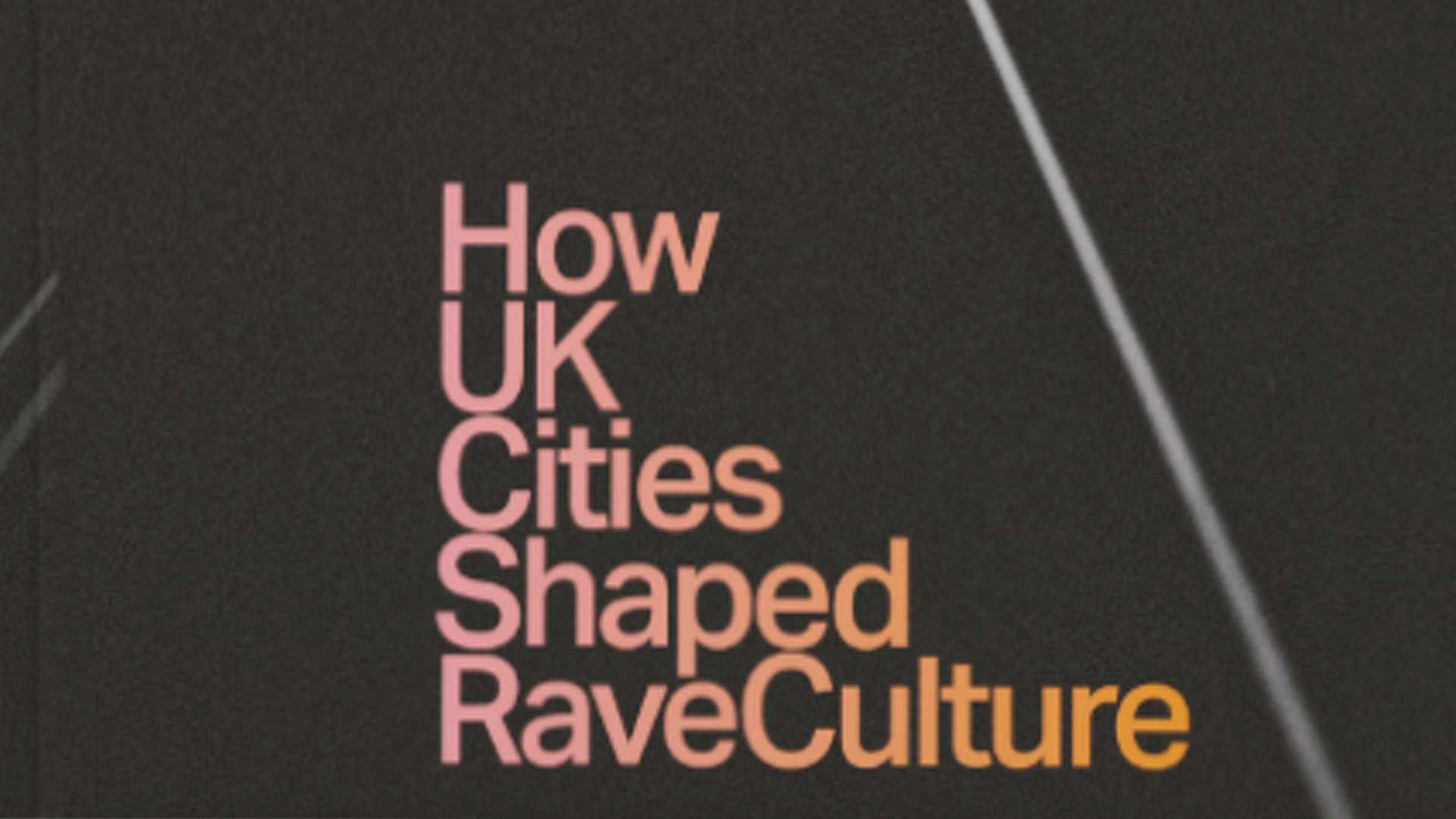 Hi Jim, we’re excited to tuck into your book ‘Out of Space: How UK Cities Shaped Rave Culture’. Can you tell us a bit more about it?

Yes of course – it’s about the relationship between clubs and the spaces that house them – and how this has helped, hindered and influenced electronic music culture. My book explores the scenes in different cities such as Glasgow, Manchester and London alongside lesser known places like Todmorden and Milton Keynes. There are also chapters looking at sound system culture (in places like Huddersfield) and the free party scene and how the environments around them have affected them too. I also look to the future of club culture and see what this might look like in light of Covid, the arrival of streaming and new spaces such as Boiler Room and the metaverse…

What influenced you to write a book about UK rave culture?

As a music writer, music lover and fairly crappy DJ, I’ve been following the various machinations of electronic music for more than 20 years. I was living in London from 2007 and went out all the time around Hackney and Dalston, including this LGTBQ+ boozer, the Joiners Arms, which came under threat from developers. My mates were part of the campaign group launched in response to this and I ended up writing a piece around the plight of the venue for Mixmag.

It seemed that this story of nightlife being forced out by development was a depressingly familiar one and the way in which club spaces are often so transient in our towns and cities. There’s often a variety of factors around this – the price of real estate, the increased urbanisation of populations, the rise of festivals, the lack of respect that club culture receives from the authorities to name just a few. At the time, we lived between a few different cities and it sparked off this train of thought around these ideas around the tensions between space and sound. Then I saw a call out from Colin at Velocity Press for pitches around potential content. I got in contact, he was interested and it bubbled from there.

How did you first get into electronic music?

I fell for music during the early nineties as a stereotypically awkward teenager who’d prefer music to social interaction. It was initially via guitar bands, then through artists like New Order, Primal Scream and the Stone Roses who strained elements of club music into their own primordial soup. I went to university in Sheffield and had this musical epiphany around LCD Soundsystem and the Rapture. As the former’s ‘Losing My Edge’ goes, I swapped my guitars for decks, started sucking up vinyl from wherever I could find it and started doing shambolic club nights with some mates.

What’s your personal view on today’s clubbing climate in the UK compared to when it first started out in the 80s/90s?

It’s moved from being this leftfield, underground culture to the centre of the mainstream. Which must be bizarre for those who have been around since dance music’s very early lawless days. It’s come a long way during these past couple of decades, going from illicit warehouse spaces to food halls and entertainment districts. I’m on a fair few online forums around rave and dance music – and there’s a lot of nostalgia for the past. Unsurprisingly, as the arrival of acid house did create a huge shock to the nervous system of the entire country. And that’s wicked to revere this of course, as it’s an important part of what we’re all about. At the same time, the future of electronic music culture is even more important. I’m not inclined to think that what happened will always be better than what’s to come. Club music has always been forward-facing, whether it be the way the music is made, the tech or the spaces where events are put on. That’s where the real excitement lies.

Moving from Sheffield to London in 2007, how do the two cities compare when it comes to clubbing? Do you prefer one over the other?

The scenes are definitely different – in London, stereotypically, crowds supposedly show more restraint than in other cities. Elsewhere, perhaps they’re more up for it although these are sweeping generalisations. I guess one of the big things you’d notice is how the scene is comparatively small in Sheffield, so you couldn’t help but know everyone who is on a similar vibe. For better or for worse. In London, geographically, it’s so sprawling, you can live there forever and only dip your toes into one particular club or scene. You’re also spoilt for choice in the capital, so I always felt like I was missing out on things as you don’t have bottomless wells of cash to tap up everything. When a wicked DJ would come to Sheffield, you’d be there for sure as it didn’t happen all that often. To me, smaller spaces and venues are more exciting – but you definitely get both in these cities if you seek them out. I’ve been to some amazing nights in London, places like Corsica or more illicit parties hosted by DJs like Oneman or Disco Bloodbath. A night by the latter with Classic Record’s Luke Solomon was in this old West Indian club called Passion in Hackney, where he was playing tracks like ‘Love Tempo’ by Quango Quango. Unreal vibes.

With many years of clubbing experience yourself, do you have a favourite ‘space to rave’? Who has been the best artist/DJ you’ve seen live?

What’s been exciting for me is just how many spaces can play host to a party. One of my favourite nights has been Kabal, this Sheffield party which has no permanent home. Instead, the promoters and DJs are nocturnal nomads, co-opting wherever they can find for their late night events. It means we’ve been to raves in former abattoirs, old cutlery works, studios, even a church which was turned into student flats. It’s obviously exciting to be in an unusual space where the vibe of the event is at odds with what a space is usually used for. I’ve always loved going to Bang Face and how this totally gonzo form of music and the mental crowd are all barrelling around a Pontins Holiday resort. At the same time, we have had mind-melting experiences seeing DJ Harvey on a beach in Tulum in Mexico or checking the Filthy Dukes on the very last morning of Benicassim.

As members of the music community, do you think we could be doing more to keep our local scenes thriving? If so, how?

One of the challenges for us now is how music is part of a wider ecosystem of entertainment and where it sits in relation to other forms of entertainment. I guess we’re very much based around experiences – so supporting a scene is about getting out there, supporting grassroots, buying music on Bandcamp, sharing on social media and connecting with other music fans.

Where do you hope to see rave culture in five years from now?

Hopefully in ruder health than it is right now and treated with the respect it deserves and given the platform and backing it needs to survive. In my book, I was really keen for it not to be pessimistic about the challenges facing club culture – which are numerous. But at the same time, it’s pretty amazing what club culture has done to get to this point and how it’s all been in spite of the behaviour of the powers be, rather than thanks to them. But that is hopefully going to change as generations more accustomed to being in clubs come into power. You can also see how the electronic music community is becoming more organised, thanks in part to the establishment of organisations such as the NTIA and the various night czars now in roles in different cities across the UK. But this issue around space isn’t going away. You can see it in Liverpool with the fights 24 Kitchen Street have had to take on alongside this latest threat to Meraki.

What was the last record or tune you bought?

There’s loads of stuff flying around at the moment – Erol Alkan’s Phantasy Sound seems to be hitting a real purple patch. From John Loveless’ ridiculous ‘High Dive’ to the new Gabe Gurnsey, they are on it.

New Ron Trent has an energy about it too and I’ve just fallen upon this ‘Wanna Get Back Your Love’ track on a Facebook forum. It’s pure end of the night, italo tackle. Wow.

We’re hitting the road to try and spread the word around Out of Space – so stopping in Glasgow on 14th July, Sheffield and of course Liverpool as well as some other spots too. Outside of this I’ll also be hitting up the Convenza Festival in September, which should be wicked. This is the Andrew Weatherall weekender in a castle in Carcassonne. It’s the first one since his untimely passing so it should be emotional…

‘Out of Space: How UK Cities Shaped Rave Culture’ is out now. Get your copy below and join us for the book launch at Melodic Bar on Thursday 29th September!