10 Questions With… A series that delves into the musical careers of some of our favourite artists, local and afar. With a particular focus on our Melodic Distraction friends and wider community, this lil natter gives us an insight into their musical escapades when they’re in their studio, not ours.

Ahead of their performance in Liverpool as part of MILAP’s Autumn programme, we chat with Punjabi meets Celtic trio, Kinaara! Originally hailing from Leeds, Kinaara will take to the stage of Leaf on Wednesday 9th November. Begun in 2018 by singer Satnam Galsian, Kinaara’s music aims to achieve an identity that reflects both their Punjabi heritage and UK upbringing. Later joined by guitarist John Hogg, the pair wanted to keep an edge to their Indian classical music by bringing in Simon, completing the multi-genre trio. We find out more about their story so far… 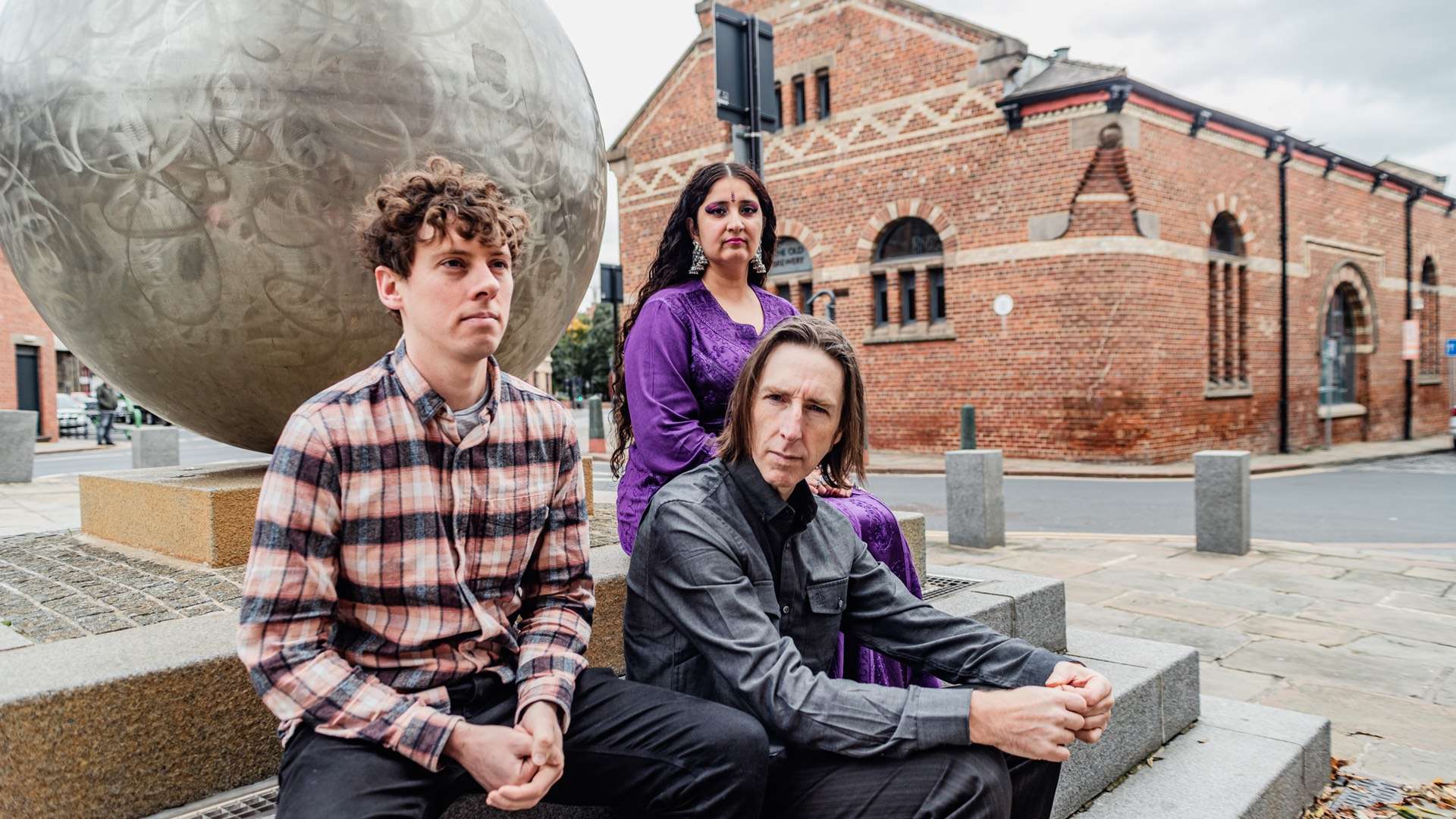 Hi Kinaara, we’re excited for your upcoming show at Leaf! Can you tell us a bit more about how Kinaara was born?

Satnam: Hi Melodic Distraction. Kinaara started in 2018 after a long break in my music career. I wanted to set up a cross-genre ensemble that had a focus on Punjabi folk songs in order to share my Punjabi heritage with diverse audiences, but with a sound that also reflected my British upbringing . I got in touch with John, we had studied together on the Indian music course at Leeds College of Music (now Leeds Conservatoire), to see if he would be interested in joining me on this new project, he said yes and then a few months later I found Simon through a mutual colleague, we’ve been working together ever since.  We’re excited for our show at Leaf in November too!

What are the main ethoses of the band?

John: To experiment, to not worry about having to sound like other people, to be a positive force in the world, to get the best out of a song and ourselves, to be good, to be a unit, to be good, to not have a bass player!

Satnam: What John said. Also to have an equal say in all decisions and always have herbal tea bags to hand.

Simon: To combine all of our influences and cultural experiences, and to make good music.

Playing a mix of Celtic and Punjabi folk songs, how do you bring these two influences together?

John: There’s Indian style alaap vocal improvisation in the celtic settings. Same with the guitar solo – at the end of She Moved Through the Fair for eg. which is influenced by Indian classical jhala where the scale is explored from low to high climaxing with the octave and a dramatic descent. I do it not too strictly and use a rock approach. We also use the tanpura- Indian drone- in the celtic songs. There’s a connection between the two anyway, as with most folk music- staying in one key, often similar scales, also the ornamentation.

Satnam: There are similarities in vocal ornamentation between celtic and Punjabi folk songs, I love experimenting with my vocals when singing celtic songs whilst also staying true to the essence of the composition. I am used to singing with a drone so it appears in all of our tracks whether it be an electronic or manual tanpura or a shruti box, the use of drone in folk music is quite common.

Based in Leeds, is there much of a scene for Punjabi music in the city? Do your surroundings influence your music at all?

John: Living in a city, rehearsing in Chapeltown, all has a bearing. It’s multi-cultural of course. There’s a big mix of genres, it’s rough around the edges. But also nature is never far away and will always make its presence felt. The words, or sentiment of a song and its history – like where it’s from, who sang it previously- and the instruments used and the creative journey of the players, have the most influence on how the song sounds though.

Satnam: Leeds is a culturally diverse city but there’s not really much of a scene for Punjabi music. We mostly perform for western audiences which is wonderful. With Kinaara I wanted to bring Punjabi language songs to a wider audience and I’m able to share my culture with people through stories and explanations about the songs which everyone finds interesting.

Simon: There’s definitely a good scene for independent music, not necessarily what we do, but we’re hoping to change that.

Can you tell us more about the process of writing your latest EP ‘Colours In Black’? Who were you listening to a lot whilst making it?

Satnam: The tracks on ‘Colours In Black’ are either folk or covers apart from Epiphyllum which John composed. We wanted to record songs that were already part of our repertoire before moving on to original material which is what we’ve been working on recently. I can’t really remember what I was listening to a lot at that time but I always listen to Fairport Convention, Hozier and Mazzy Star so it was probably the same back in January.

John: It’s a collection of what we were doing at the time which is as it should be. Back in January- I can’t remember what I was listening to which means it had no influence on what I did. Well actually I know I will have been listening to some blues probably Freddie King or some such at the time. For the instrumental, I’d had the idea of writing one based on raag Rageshree, a raag I’d studied for ages and so I went for it with the idea of starting with a kind of hooky pop folk idea and then moving into Indian classical areas.

Simon: When we work on songs I usually listen and come up with a groove on drums which I think will suit the track, I sometimes play a couple of variations and ask Satnam and John for their opinion about how it sounds. Back in January I was listening to Roy Haynes a lot, a record called Equipoise.

Would you say your sound has evolved much since debut EP ‘Across The River’ ? If so, how?

John: We’ve become a better unit, the songs are tighter. The songs from the first EP, when we play them live, have altered a little bit here and there to get the best out of them.

Simon: We have refined our sound, the music is tighter now. I feel like we all know how each other works better now which helps, we know how to play together better.

Satnam: I think it has evolved somewhat since Across The River, as both John and Simon have said we are tighter as a group now and it shows, especially in our live performances.

Having gigged across the country, including a standout performance at Musicport Festival 2021, what’s been your favourite performance to date? Dream venue to play at?

John: My favourite performance is still Musicport, though the last one at Small Seeds in Huddersfield was very good in terms of the playing and the band being tight. Dream venue at this juncture – well a good stage at a prestigious festival would do it.

Satnam: My favourite performance in terms of connecting with an audience has to be Musicport. Recently I enjoyed playing at Otley Live, Chapel Allerton Arts Festival and Small Seeds. I always enjoy Kinaara gigs, performing with John and Simon is an absolute joy. I’d love to perform at WOMAD.

Simon: My favourite gig was Musicport and I also enjoyed performing at St Hildas Church in Danby as part of Musicport on the Road in 2019. Dream venue to play at is  Førde Festival in Scandinavia.

What instruments do you each play?

Simon: I play drums, percussion and a little guitar (not for Kinaara though).

Satnam: I sing and play drone instruments; shruti box and manual tanpura, occasionally you’ll see me on stage with a tambourine too!

John: The last record I bought was ‘Music for the Eyes’ by Concerto Scirocco.

Simon: The last record i bought was ‘Mean What You Say’ by Philly Joe Jones

Satnam: My last musical purchase was ‘Upstream’ by Maddie Morris

Satnam: Releasing a single or two, working on original material which will go on an album, and hopefully lots of gigs.

John: I believe we have planned a single, an album and festivals all Summer long!

Simon: Making an album and maybe a tour. A tour would be great!

Kinaara will take to Leaf on Wednesday 9th November as part of MILAP’s Autumn season. Grab your tickets here and check out our recent interview with MILAP’s Artistic Director Alok Nayak here.