This week we chat with Bristol-born, London-based Not Bad For A Girl and AAJA Radio resident, DaiSu! A main player of the Manchester electronic music scene since 2018, DaiSu has made radio appearances on BBC 6 Music, Threads* and more. She’s played on line-ups for Keep Hush, Loose Lips and Red Bull to name a few, and this Friday will see her debut EP ‘Lightwork’ drop via Gather Records. We find out more below… 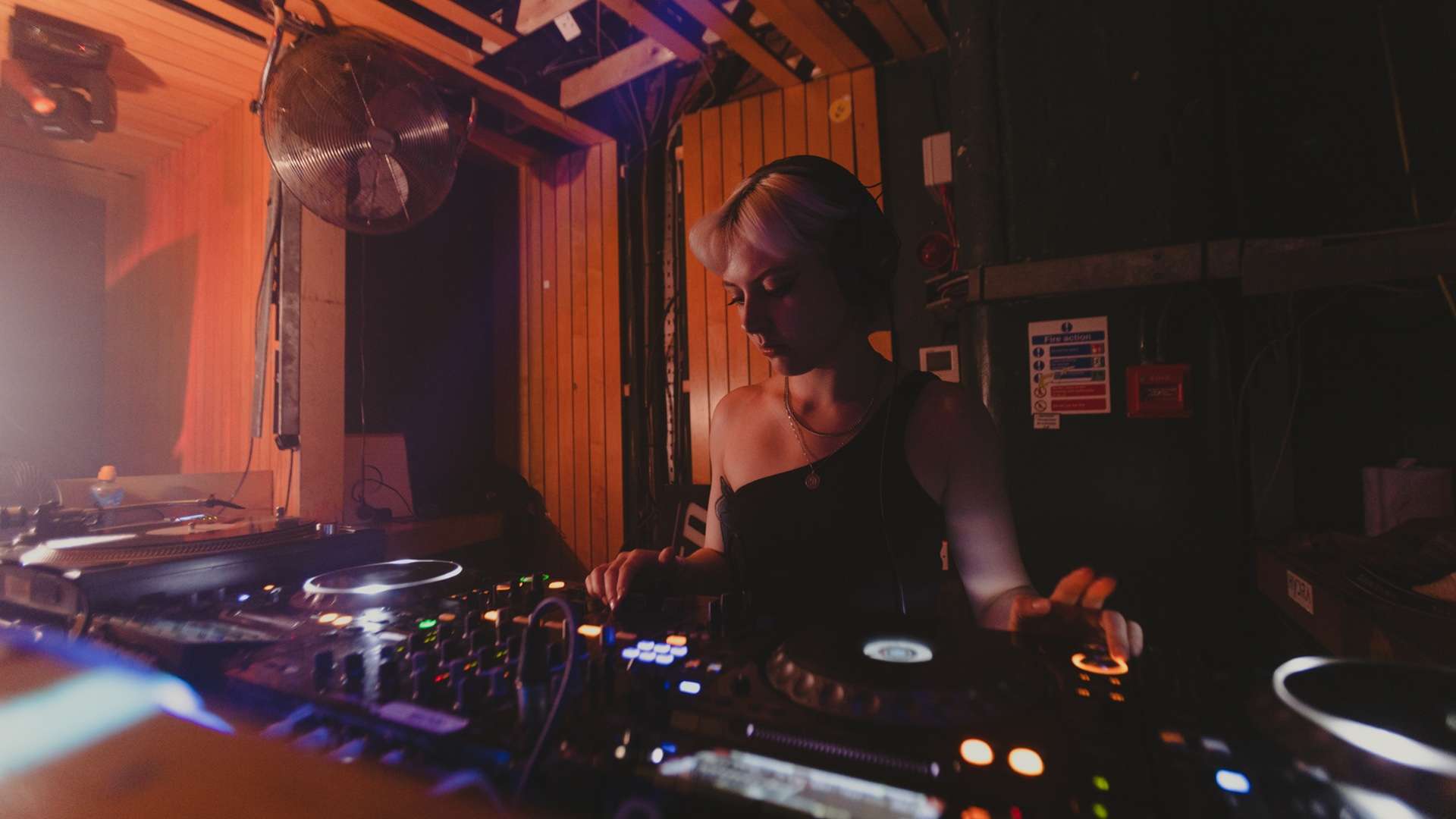 Hi DaiSu, we’re super excited for your upcoming ‘Lightwork’ EP release on Gather! Can you tell us about the ideas behind it?

The first track I wrote for this release was ‘Not Even’ back in early 2021, and promptly forgot about it. When Gather first contacted me for demos, it was ‘Not Even’ and another track that I sent over but decided to rework before they were sent to be mastered. The vocal chop in it is from an acapella version of a well-known pop song that I was shown and was almost immediately inspired to use in my own production. When I came back to rework it, my skill and style as a producer had changed. It felt good to come back to it with fresh eyes and see how far I’d come. As for the other demo, I replaced that at the very last minute with ‘First in the Fight’. I’d spent the best part of a month stressing over reworking it and ultimately, ended up writing it from scratch in the space of about a week. I use a lot of 2-step beats in my production but with ‘First in the Fight’ I wanted to make something with a more explicitly garage feel to it, inspired partly by Gather’s previous releases. ‘Lightwork’, the titular track, was one of those tracks that came together really easily. I like to try and use samples I’ve recorded myself, and for Lightwork I had a 1-2 second snippet of some neighbourhood noise that I wanted to try and incorporate. I ended up pitching it up, chopping it and making it into the repeated four chirps that run throughout the track.

A fair bit of Ivy Lab, Cameo Blush and Hamdi, but also a lot of UK Funky and a little bit of grime. I had Roska’s ‘UK Funky Trax’ playlist on a loop whilst at the gym.

My first experience with music was playing recorder in primary school! I think it’s a right of passage for middle class children to play recorder at this point. I then did BTEC Music at GCSE level, but didn’t do anything musical for years after that until my final year of university. Dance and electronic music had been my ‘guilty pleasure’ for a long time, until I came to uni and realised that’s what most people were listening to. DJing wasn’t even on my radar before that. I knew a lot of boys at uni who DJed, but I was always too nervous to ask anyone to show me until my housemate offered to teach me in final year. I remember the moment I realised it wasn’t anywhere near as hard as all these boys had made it out to be, and after that I was all the more keen to learn how to make my own music.

Co-founder of Not Bad For A Girl, can you tell us how and why the group started?

We mostly all met at a charity event at Bread Shed in February 2018, which was run by the University of Manchester’s student radio station Fuse FM. It was the first time I’d ever DJed outside of my friend’s bedroom and it went horribly (the connection between the decks didn’t work and I ended up playing each song one after the other out of one side), but through this I met Martha, who had organised the night, and we bonded over a shared frustration at the treatment of gender minorities in the music scene. Not Bad For A Girl is very much Martha’s brainchild, but I’m grateful to have been there from its inception. We decided to reach out to the other DJs from the event at Bread Shed and make a group chat, and NBFG was born.

What challenges do you think emerging female/gender minority producers face, and what would you like to see change?

Accessibility poses a huge challenge to budding producers, especially those from marginalised and minority backgrounds; DAWs software can be expensive and even the free programs aren’t especially intuitive without someone to talk you through it. Even once you feel relatively confident making music, it’s incredibly intimidating to try and make a name for yourself in a scene that is dominated by white, cis, straight men if you don’t fit that criteria. Part of being an artist is self-promotion and networking amongst your peers, which is difficult if you don’t see yourself represented and might not feel like you’re able to relate to the people you are seeing. However, change is beginning to take place, slowly but surely. Many collectives such as Shifting Spheres, Beatriarchy, All Hands On Deck and Bad Taste organise regular DJing workshops and open decks aimed at people from underrepresented communities, which are so important for helping emerging artists to find support systems and meet other people who may be new to the music scene. I’d love to see more groups and workshops for budding producers, like Dubs Club in Liverpool, that can help to build peer communities for up and coming musicians.

What’s your take on the Manchester music scene? Are there any up-and-coming producers we should have on our radar?

The Manchester dance music scene has definitely solidified itself as one of the best in the country over the past few years. I’m really excited to see the number of new events and collectives popping up run by women and non-binary people such as Tough Act, as well as the continued success of more established nights like Meat Free.

However, it’s not without its issues. The nightlife in South Manchester has been under threat from venue closures for years; reducing the number of small, independent venues means fewer people are able to run their own events due to the high booking fees of larger, more commercial venues. Furthermore, diversity on line ups should not be exclusive to the events run by members of marginalised communities. Bookers and promoters often treat diversifying as a box ticking exercise and tend to reach for the same few artists to put on every line up. There needs to be more of a conscious effort from these people to provide opportunities to newer artists as well as the more established ones, or the scene is at risk of stagnating with the same few names on a loop.

On a lighter note, Manchester has put out some of my favourite producers. The wonderful SCAPA released her EP ‘I Deserve Nice Things’ at the end of last year, definitely one for fans of dreamy synths and hard percs. All the artists featured on NBFG’s ‘Big Bally Beats’ VA as well, including my fellow NBFG residents Egg On Toast and Maracuya, and techno goddess Vindya. Mystique is currently working on an exciting project that I’m so excited for everyone to hear, she’s really put her blood, sweat and tears into it. Dulha is also a prolific producer who’s been popping off since his debut release with Interpolate Records last year and hasn’t shown signs of stopping anytime soon. Trax Haven have come out with some of my favourite releases over the past couple of years and I know they’re currently working on the second ‘Meet Me At Nando’s’ VA, for fans of silly and goofy 160+ edits. Finally, I can’t not mention Melodic Distraction’s own hyper-pop princess NIIX; I can’t wait to see her headlining festivals in the next few years.

Also a prolific DJ, what’s been your favourite show so far? Dream artist to play alongside?

Playing for Keep Hush’s Off Sight series in 2021 was a pretty surreal experience! Besides being an amazing opportunity, it was the first time I’d played on a club sound system in well over a year, which made it all the more exhilarating. Two of my favourite events so far would have to be NBFG’s joint 3rd birthday event with Trax Haven back in April and (of course) Rat Rave in July with Kitsta and Mystique.

I’d love to play alongside Sicaria Sound or Anz – Sicaria Sound are one of the most iconic bass acts of the past few years, and Anz’s production and track selection is unparalleled in terms of creativity.

When you have a bit of creative block, what’s your usual strategy to push past it?

Without sounding pretentious, I really like to try and work on my music theory. Sometimes going right back and learning the basics is a really good way to understand what it is the project you’re working on might need, or can inspire me to try a new technique for a track. I have a little notebook on my desk and I like to sit and watch a Youtube video and make notes I can refer back to.

Ahadadream’s ‘Rosalia Drum Dub’ – MYNA played it in her guest mix for my most recent AAJA show and I immediately ran to Bandcamp when I heard it.

I’ve just moved down to London in the past couple of weeks, so I’m still getting acquainted with the scene down here and I’m hoping to start getting booked locally soon.

I’ve got my first show in my hometown, Bristol, on Friday 9th September (details TBA) which I’m unbelievably excited about. I was very privileged to grow up there so it’ll be lovely to come back and play as an adult. I’m also coming back to Manchester for Ghosts of Garage on Friday 23rd September, which should be a really fun gig!

In terms of production, I’ve got a 160 track coming out on Excess’ Any BPM Vol. 2 VA on 9th September, but other than that it’s all tracks I’m just sitting on waiting for the right label to come and sweep me off my feet.

DaiSu’s ‘Lightwork’ EP drops this Friday on Gather Records. Have a cheeky listen and pre-order below!