For our first edition, we’re delighted to chat with London-based artist, Charles Vaughan, ahead of the release of his deeply contemplative and cathartic EP, ‘reflection, exhale’. 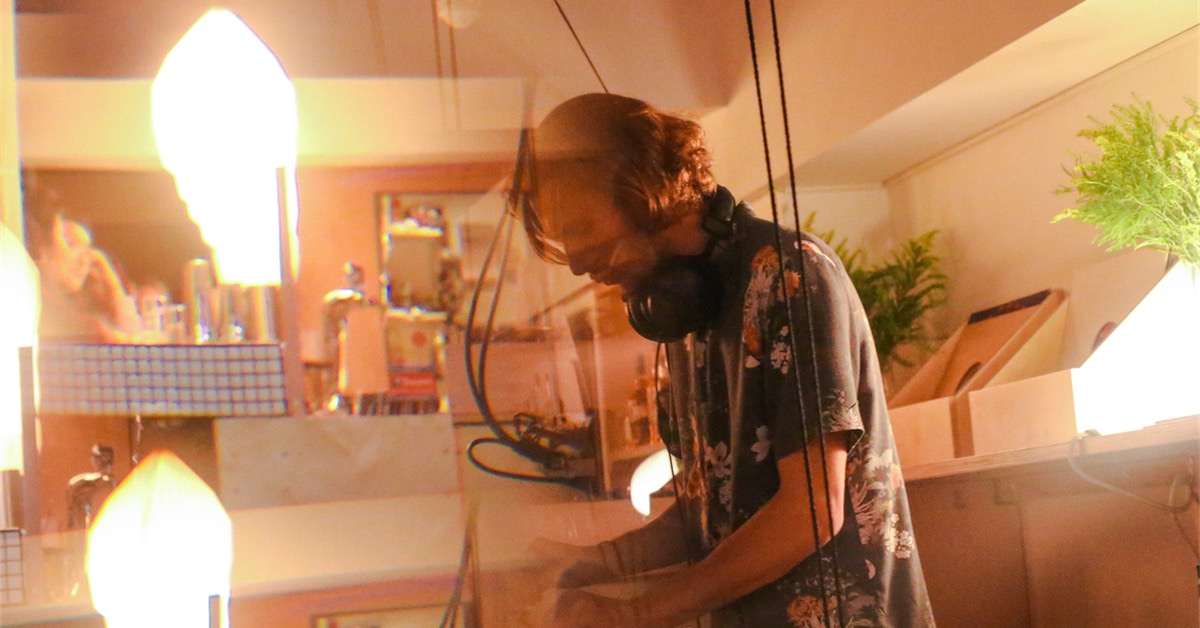 Hey Charles, the EP is sounding great! How did this release come about? The title is quite striking – did the tracks inspire the title or did you begin with ‘reflection, exhale’ as a starting point?

I really didn’t have much of a plan for the title or any larger thematic ideas when I was writing the tracks. I started writing them because I was struggling with everything going on in my own life and giving myself space to write music was really a lifeline for my sanity. But through that, I realised what each track represented to me, and therefore what they would represent together as an EP. So when I worked this out, I sat down and tried to summarise what the EP was for. And really, making this music is a chance for me to reflect on my emotional and mental state and then just breathe; letting the music process guide me away from those anxieties.

I was listening to quite a big variety of things due to the fact I work on three radio shows a month, each with fairly different genre briefs. In particular, starting the Resolution radio show on Balamii over lockdown really allowed me to engage with new electronic music in a way I hadn’t had the chance to before. Thanks to the show, I was going through the latest IDM, ambient and bass focussed music from a huge scope of artists. Definitely artists like Special Request, H. Takahashi, Floating Points, Jennifer Walton and others influenced each of the tracks in their own ways.

What was your process when writing the tracks? Did you have collaborators, mentors or friends to bounce ideas off along the way?

Each track really came from just having time to work on anything I wanted thanks to COVID and all. Like I said, it was really an exercise to help with my anxiety and mental state, so it wasn’t hugely premeditated. When creating it though, I did have the intention of releasing the tracks as quickly as possible, as I have a tendency to endlessly tweak tracks without ever releasing them. One of my housemates also produces so sometimes he comes into my room and we’ll go through a track and talk over ideas, get some general feedback. But aside from that, it’s normally just myself working away at it.

How did the collaboration with Piksel come about? How do you find working with other artists?

I know Piksel through Resolution, as we’ve booked her for our nights before and we filmed a performance of hers last summer for our Venue MOT isolation sessions. She is one of the most talented producers I know and has this incredible ability to create deeply intricate sonic landscapes that I just get lost in. That track, ‘Crisis’, was really missing something melodic and emotionally charged. So I sent her a quick message and what you hear is literally the first take she did. It was perfect, of course, and the whole track came together so beautifully from that.

When I make music I’m pretty self sufficient in that I don’t often collaborate or work with people. It’s less out of choice, it’s more that I think writing is a bit of a personal process for me and I just enjoy being alone in my room and making things. That said, I had intended to have more collaborations on this EP as a challenge to myself, but people were surprisingly busy! So in the end, Piksel was the only collaboration, although I think it was the only one needed. But I want to challenge myself to collaborate more and I’ve got some great stuff in the pipeline with that in mind.

Who designed  the artwork? What are the thoughts behind the artwork and how does it tie into the music you recorded?

The artwork was  done by my good friend Ashley Carter. We’re really close mates and have worked together on a lot of projects before so when I described the EP to him he was onboard straight away. Initially I think I went in too complex with my ideas and the different stylisation references I gave him and the drafts just didn’t fit. Then Ashley sent over a design with one of the shapes and we decided to explore that. Pretty quickly we hit upon the final artwork. Each of those shapes is meant to represent one of the tracks, each providing a window into something greater. We tried to keep it as minimal as possible and strip out anything that didn’t really enrich the overall image and I actually love what he did with it, it’s perfect.

How does an idea first come to fruition?

I think for me it’s normally just hearing something that triggers something inside my head. Each of these tracks’ core ideas came from me listening to something and suddenly hearing this whole other track out of it. For ‘Crisis’, the main pad is actually from the Saw III soundtrack, for ‘Tired’ the drums are a chopped and screwed version of some Special Request drum stems and for ‘Better’ it was a phantom melody that I could hear over a H. Takahashi record I was listening to. In each case, I heard that trigger and immediately sat down at my computer, and most times I already know exactly how the track is going to sound and where it’ll go, it’s just about getting it down.

I feel like I’ve contemplated this idea too much over the last few years. I had a real crisis a few years ago where I felt I wasn’t writing music for the right reasons or I wasn’t forming big enough ideas behind the music I was making. I’m not particularly inspired to write from anything in particular. You read about a lot of artists whose music for them represents something really important or are inspired by these grand ideas of their place in the world. I never really resonated with this though. I write because I like the process and I like the product. I enjoy the experience and it’s an important part of caring for myself. I guess I would say I’m inspired by the music that I can make and the process that goes alongside with that. Making one thing always leads me to wanting to make another, because I’ve loved the process and, hopefully, the music that’s come out of it.

Do you see the project as a continuous listen or as stand alone tracks?

Initially the project was definitely a set of stand alone tracks. When I first put them together as an EP, I was a bit worried because tonally they’re very very different from each other. But after considering what each track represented and what the process meant, the more continuous experience worked for me. I think I’d be happy for someone to experience the EP as individual tracks or as a continuous project to be honest, I think it works well in either direction.

What mood would you personally associate with each track?

‘Crisis’ is a sense of longing, desperation, a somber desire for change. But equally glances of hope shining through. ‘Tired’ is equally an expression of anger but also just good fun. Maybe a touch of nostalgia for clubbing as well (RIP the clubs). ‘Better’ is stillness. I’m not sure that’s a mood but that’s what it evokes to me. Stillness externally and internally.

So I have a really fun remix coming out in March with Crisp & Classy which I am really excited to release. I’m just about to start working on a remix for one of my favorite Polish Jazz bands which is a sick opportunity and I’ve got some really great ideas for. Alongside this, I want to spend a bit more time making some fun disco stuff too, so there’s a cheeky Beyonce remix coming soon as well as a mammoth 15 minute multitrack remix. Aside from that, I’ll still be working on Universal Sanctuary on Worldwide FM, Resolution on Balamii and of course my own show on Melodic Distraction, which we’ve got some amazing guests for.

Maybe I’ll get some rest sometime soon too, that would be fun.

‘reflection, exhale’ lands on Friday 5th March. Pre-order, stream and support here, and be sure to catch Charles’ next radio show on Melodic Distraction this Friday.